Churches in Asia and Africa are strongly opposed to homosexual marriage. (Photo: YouTube)

By resorting to theological tidbits, a progressive pope and his proposed inclusive Church have dumped same-sex unions.

Sticking to the centuries-old dogma that same-sex unions are a sin and unnatural, the Vatican's Congregation for the Doctrine of the Faith (CDF) proscribed imparting priestly blessings on homosexual unions, which are outside the purview of the sacrament of marriage, on March 15.

Blessings are Catholic rituals performed by a qualified minister in which certain divine marks are invoked upon the person/s or things blessed. What is being blessed should be “objectively and positively ordered to receive and express grace, according to the designs of God inscribed in creation” and same-sex unions are outside of it, the CDF explained.

Another reason cited by the CDF is that blessing homosexual unions may be mistaken for the sacrament of matrimony.

The CDF’s explanation was released ahead of the fifth anniversary of Pope Francis’ apostolic exhortation Amoris Laetitia, which addressed the pastoral care of families, also referred to in the CDF statement.

After many governments worldwide made same-sex marriages legal, a trend has started of conducting gay and lesbian unions in public with the active participation of family members, parishioners and the public.

Buoyed by government backing and public support, homosexual groups have sprung up among the faithful in many dioceses, seeking religious endorsement for their childless act of love.

In some countries, parishes and ministers started imparting blessings to same-sex unions in lieu of marriage. In fact, a few bishops were asked to de facto institutionalize this practice of pastoral blessing.

Bishops’ conferences in those countries, particularly Germany, were forced to knock on the door of the Vatican for clarification.

In fact, some of them were expecting a positive reply from the Holy See as the pontiff himself had sought legal protection for same-sex unions in the civil sphere during a 2019 interview. 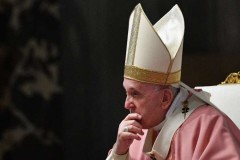 To their dismay, the reply from the CDF has the green light from the pontiff himself. The negative answer to same-sex weddings has, however, left the Church in a quagmire.

The Church can bless “individual persons with homosexual inclinations” who are celibate by following the Church's doctrines. But when such persons find love, happiness and companionship and build a family, the Church’s answer is negative.

In explanation, the Church says it welcomes and blesses gay people, but not their unions, citing the clauses of sacramentals that lead to the sacraments. In the case of homosexual unions, their failure to produce children as planned by God through the sacrament of marriage stands as an impediment to impart blessings to such unions.

Though the Church has denied the sacramental blessing to same-sex unions, the Church still finds positive elements in them. Again, the Church asks the faithful to treat gay people with dignity and respect. But when it comes to their sexual orientation, it is considered intrinsically disordered.

Ahead of its synod, the German Church has been pushing a debate on outreach to gay Catholics.

Reacting to the CDF explanation, Bishop Georg Batzing, the head of the German Bishops' Conference, said the new document would be taken up for discussion, but he added that the case is by no means ended. “There are no easy answers to questions like these," he said.

More than 230 professors of Catholic theology in Germany and other places have signed a statement flaying the CDF’s decision.

The statement issued by them noted the Vatican’s text “is marked by a paternalistic air of superiority and discriminates against homosexual people and their life plans."

"It is not surprising but still disappointing that the Vatican has responded 'no'," said Francis DeBernardo, executive director of the gay Catholics group New Ways Ministry.

The issue of same-sex unions cropped up in 2003. That time a Vatican document observed that it was “necessary to oppose legal recognition of homosexual unions” as they “obscure certain basic moral values and cause a devaluation of the institution of marriage.”

A Pew Research survey in 2020 found that the majority of Catholics in the US and Western Europe do not disapprove of gay marriages, while the majority in Eastern Europe and the former Soviet bloc are against it.

Churches in Africa and Asia are also strongly opposed to homosexual marriage.

Like the row over birth control before it, the debate on homosexuality cannot be delayed on theological and sacramental terms in the long term because the number of people on the planet depends on sociopolitical circumstances.