A flooded house in Kottayam district of India's Kerala state, where torrential rains have inundated hundreds of villages and displaced at least 100,000 people. (Photo by IANS)

Unusually long and heavy monsoon rains have inundated several parts of India and claimed at least 537 lives as church agencies and others reach out to help some two million people affected by floods.

The Federal National Emergency Response Centre has recorded floods in six states after the monsoon began in Kerala in the south in early June.

As the monsoon spreads to other states, rains are expected to weaken in Kerala. But downpours continued to lash the coastal state even on July 31, with several of its small rivers in spate and the Idukki Dam near capacity.

The church agency has already supported 3,700 families with kits providing drinking water, sanitation and hygiene products. It has also provided food kits for 1,400 families in Assam.

A food kit can feed a family of four for 20 days and includes rice, pulses, salt, cooking oil, soybean and biscuits.

Caritas India has spent 3 million rupees (US$47,000) on flood relief without discriminating against people based on religion in Kerala besides sending 4,000 food kits to affected areas. 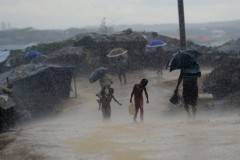 "Special medical teams have been formed from Catholic hospitals, while rescue teams comprising Catholic volunteers are out in the field to support affected people," he said.

"We face a very grim situation in the state as rain continues and more and more areas are getting floods."

All 32 Catholic dioceses in Kerala have been involved in rescue and relief operations.

Bishop Theodore Mascarenhas, secretary-general of the Catholic Bishops' Conference of India, said the church is committed to assisting the suffering with "whatever resources at our disposal."