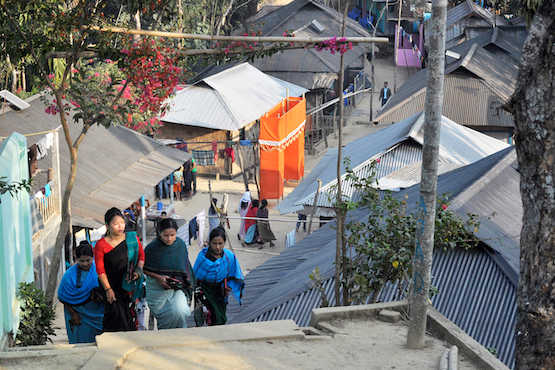 Tribal Khasia women in their punjee (village) in this 2015 photo. Local authorities in Moulvibazar, northeast Bangladesh, have issued an eviction notice to force out some 700 Khasia people from two punjees before June 12. (ucanews.com photo by Stephan Uttom)

The district administration in Moulvibazar on May 30 issued a notice to some 700, mostly Catholic, indigenous Khasia people to move from their ancestral lands at the two villages collectively known as Nahar Punjee in Sreemangal sub-district before June 12.

The authorities accused them of illegally occupying 60 hectares of government land and running betel leaf plantations.

The notice warned that the authorities would use the police to force out the residents if they fail to move out within the deadline.

The notice has panicked some 85 families living on 101 hectares in Nahar Punjee adjacent to Nahar Tea Estate in Sreemangal, a tea plantation hub in the four-district tea estate region of northeastern Sylhet division.

The move is "inhuman and unacceptable," said Holy Cross Father Subrato Boniface Tolentinu, from the parish of St. Joseph's Church in Sreemangal, which covers the village.

The church would put its weight behind to protect Khasia people, said Father Tolentinu who is the convener of the Justice and Peace Commission in Sylhet Diocese.

"We have informed our Bishop [Bejoy D'Cruze] and Caritas about the issue. We will stand with these people and if necessary we will file a writ petition against the move in court if necessary," said Father Tolentinu.

The Khasia are a matriarchal people found in India and Bangladesh where they traditionally live in hilly country and forests where they chiefly rely on betel leaf cultivation for a livelihood.

There are roughly 30,000 Khasia in Bangladesh and about 80 percent of them are Christians.

Ferli Surong, a headman of one of the villages in Nahar Punjee regrets the government order.

"It is true that the land belongs to the district administration but we have lived here with permission and have been paying taxes regularly. So, it's wrong to say that our homesteads and plantations stand on illegally occupied lands," said Surong, a Catholic.

"We too are Bangladeshi citizens and the government can't be so cruel to force out from the lands where we have lived for generations," he added.

Tribal rights activists allege that the district administration is acting in support of Nahar Tea Estate, which has been trying to grab land from the Khasia since 2007 so as to expand their estate.

In 2010, the district administration awarded a contract to a local timber trader to cut down of 4,000 trees in the area. The trader allegedly destroyed some 7,000 trees that the Khasia used for betel leaf cultivations, Talang said.

The tea estate was established in 1964 on leased government land but Khasias have lived in the area for a lot longer, she said.

"For years they [the tea estate owners] have tried but failed to evict Khasia people by force, but now they are trying to use the law and the local administration," she says.

In order to save their lands, the Khasias filed two land occupancy cases in the district court in 2012 and 2014, which remain unresolved to date.

Rights activists say the authorities have no right to issue a eviction notice as long as the cases remain unresolved.

"The notice has no validity as long as the cases are not resolved, the authorities are supposed to know. It seems they are trying to scare the local people," said Sanjeeb Drong, secretary general of Bangladesh Adivasi Forum.

Drong, a tribal Garo Catholic, said that they are using all possible channels to resist the move.

Four Khasia leaders traveled to Dhaka on June 3 and met with the chairman of National Human Rights Commission. They also sent a letter to deputy commissioner of Moulvibazar, the chief government officer to cancel the notice, said Drong.

"We are also engaging with media and also looking at possible legal action. Besides, people are ready to hold protests against the move," adds Drong.

Additional deputy commissioner of Moulvibazar, Prakash Kanti Chowdhury, who signed the notice, denied the alleged link with the tea estate owners over the eviction notice and admitted having no prior information about two pending cases.

"The allegation is baseless. The eviction notice was served through due procedure but our local officials were not aware about two pending cases," Chowdhury told ucanews.com June 6.

The administration would respect the law and behave "humanely" to the Khasia people, he added.

However, the official didn't hint at withdrawing the notice sooner.

Meanwhile, the Khasia people vow to fight for their claim on the land, said Ferli Surong.

"We would like to live and die on this land like our ancestors did. We will sacrifice our lives but we won't move out from here," he added.

Around 3 million of Bangladesh's 160 million people belong to about 45 ethnic tribal groups.