At least 20 dead, 350,000 seek shelter as strongest storm of the year strikes 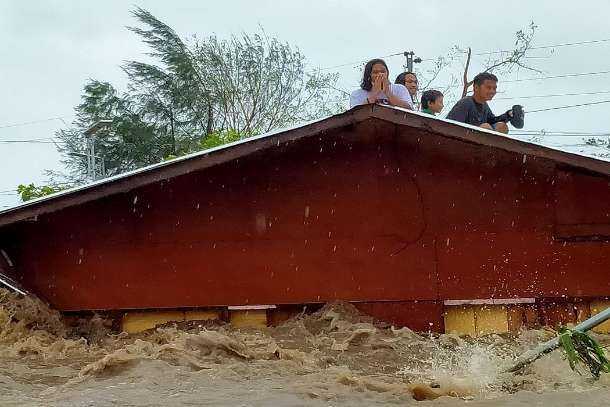 A family sit on the roof of their home to escape floodwater brought by Super Typhoon Goni in Albay province in the Philippines on Nov. 1. (Photo supplied)

Churches in the Philippines have thrown open their doors to offer shelter to some of the hundreds of thousands of people who fled their homes to avoid the wrath of Super Typhoon Goni that struck the Bicol region in southern Luzon on Nov. 1.

The typhoon, the strongest in the world this year, killed at least 20 people and forced around 350,000 from their homes, according to authorities.

With sustained winds of 224kph and gusts of 278kph, it was one of the strongest storms to hit the Philippines since Super Typhoon Haiyan killed more than 6,000 people in 2013.

Some of the victims were buried alive by mudslides around Mayon volcano.

“At least seven were killed in our province. Two of them, a five-year-old and his father, drowned while several others were swept away by volcanic mud,” Albay governor Al Francis Bichara said.

He said the mudslides also buried homes and damaged bridges and roads near the towns of Daraga and Santo Domingo.  Many people were also left without power in the province. “[Albay] was battered,” Bichara added.

The Philippine government estimated the damage to the province’s agriculture sector at about 1.1 billion pesos (US$22 million) with rice fields destroyed and many coconut trees uprooted.

“Almost 20,000 hectares and about 20,000 farmers have been affected,” Agriculture Secretary William Dar said.

Father Treb Futol of Sorsogon Diocese said his parish had set up a soup kitchen and was feeding evacuees who fled their homes and who would normally have been marking All Saints’ Day.

Meanwhile, Father Ranhilio Aquino of Tuguegarao Diocese in northern Luzon appealed for help for those affected by the typhoon.

“Many … are shivering in the cold, no beds, perhaps even no more home. Many are grieving the loss of loved ones while still laboring to salvage the little they have that is left,” he said in a social media post.

He said they were in touch with social action centers in typhoon-hit dioceses to ensure fast and efficient distribution of relief goods to victims.

“Caritas is also ready to send financial assistance if and when needed by dioceses damaged by this [typhoon],” the bishop said.