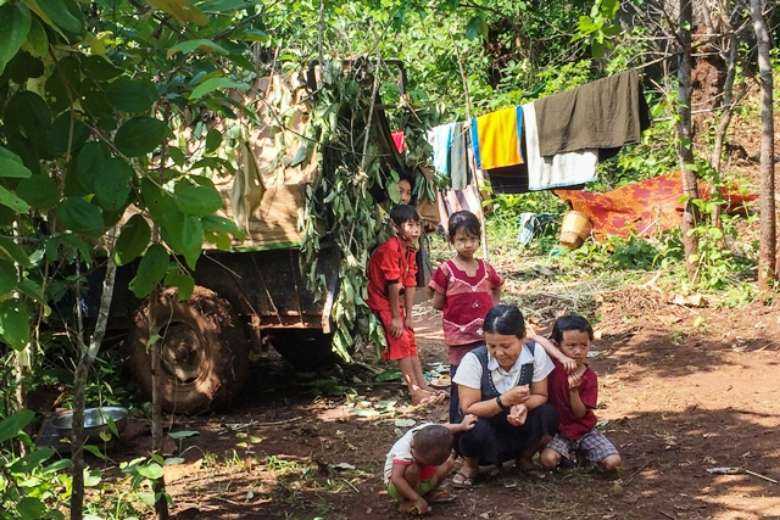 The Catholic Church is helping evacuate and shelter thousands of people fleeing their homes in conflict-torn Kayah state in eastern Myanmar.

It is also providing food and non-food supplies to those rendered homeless in and around the state capital Loikaw, where fighting has escalated since Jan. 6.

Myanmar’s military has continued airstrikes and artillery shelling even after two-thirds of the town’s population of around 50,000 people fled their homes, according to local aid groups.

Father Francis Soe Naing, chancellor of Loikaw Diocese, said they were helping people from some parishes to move from their homes into the church compound. There were some who had arranged to move to safer areas by themselves, he added.

Around 300 people have taken refuge inside the Christ the King Cathedral compound in Loikaw. The church was providing them food, shelter and non-food items.

“As the situation is getting worse, each day we are seeing more and more people pack their belongings and leave the town on motorcycles and in cars to safer areas,” Father Soe Naing told UCA News.

The priest said they intend to stay put and help people escape the worsening situation in the state capital. Some parishes in the vicinity of Loikaw had been abandoned as clergy, nuns and parishioners fled following intense fighting since last week.

At least 15 parishes in Loikaw Diocese have been severely affected by the ongoing conflict, displacing more than 100,000 people, including Catholics.

At least five Catholic churches in the diocese have been damaged by artillery shelling while a church and Marian shrine were damaged in neighboring Pekhon Diocese last year.

The region bordering Thailand was relatively peaceful for decades but has seen intense fighting since May 2021.

Some 35 civilians including women, children and two aid workers from Save the Children were killed by junta troops and their bodies set on fire in Mo So village, Hpruso township, on Dec. 24.