A resident fishes by the river in Palangkaraya city, one of most affected by haze in Indonesia's Central Kalimantan province, on Oct. 21. (Photo by Haris Sadikin/AFP)

As part of the protest in Palangkaraya, residents gathered early Oct. 21 to collect donations from passersby. The protesters then delivered more than 16 million rupiah (about US$1,200) to acting Gov. Hadi Prabowo, who will then deliver the donations to the federal government in order to prod them for more help to combat the crisis.

Holy Family Father Andreas Adi Tri Kurniawan, of the Palangkaraya Diocese's youth commission, told ucanews.com that the action was aimed at questioning the central government's efforts in addressing the haze blanketing the region.

Father Jurniawan said residents have been affected by the haze for about three months, "but the condition worsened a few days ago," with the pollution standard index about 10 times higher than normal levels.

He said the church had distributed more than 25,000 donated face masks to help local residents breathe.

Wandeh, a member of the Dayak indigenous community, said he hopes the money raised will encourage the federal government to immediately address the haze in the town and across the province.

"The point is that we need to remind the central government that their efforts should not focus only on Sumatra island but Kalimantan too," he told ucanews.com.

The haze is caused by slash-and-burn farming techniques used by palm oil, pulp and paper plantations that populate Sumatra and Kalimantan islands. Vast tracts of land have been cleared using this illegal method. The dry season brings wild fires, which fill the region with acrid smog.

Central Kalimantan, West Kalimantan, South Kalimantan, Jambi, Riau and South Sumatra are the provinces hardest hit by the air pollution originating from fires in peatland and plantations. The dense haze has also plagued parts of Malaysia, Singapore and southern Thailand.

Brigong Tom Moenandaz, who heads Central Kalimantan's disaster mitigation agency, said poor visibility due to the thick haze has made it difficult to extinguish the fires. He also noted that there have been thousands of reported cases of severe respiratory infections and diarrhea among the local people. 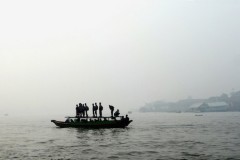 Prabowo told reporters that the federal government had given about one-third of the US$1.7 million the province requested to address the haze crisis.

"Indeed, the central government's aid isn't widely circulated yet compared to Sumatra Island. The current condition of haze in Central Kalimantan is worse than Sumatra (Island)," he said, according to Liputan6.com.