People's support is vital in effort to end decades long insurgency, they say 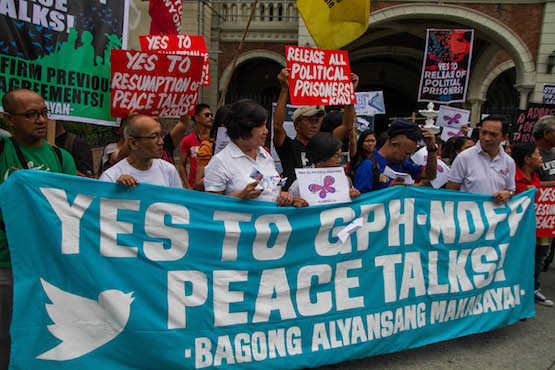 Church groups have urged Filipinos to actively participate in the peace process between the government and communist rebels who have been waging an almost 50 year insurgency that has killed and displaced thousands of people.

"Peace is not just for the government and for the leftists," said retired Bishop Deogracias Iñiguez of Kaloocan, chairman of the Ecumenical Bishops Forum.

"Let us be involved," the prelate told ucanews.com, adding that the country's church leaders are "committed to supporting the negotiations."

On June 17, faith-based group Pilgrims for Peace launched a nationwide campaign aimed at updating the public on the prospects of peace.

Father Benjamin Alforque, the group's convenor, said they would conduct "talking tours" to provide "impetus" for organizations, schools, institutions and communities to help in the peace process.

"These activities will offer a basis and framework for equipping the public for participation," said Alforque.

He admitted the need "to educate people about the talks," adding that even some church leaders need to be informed of its importance.

The priest said some Catholic bishops, priests, and nuns do not agree with the idea of talking with the rebels.

"Church people have different views about the peace talks and the communists," said Alforque.

The Philippine Ecumenical Peace Platform, the country’s largest ecumenical formation of church leaders, said it is "elated over the fact that bridges are being built by both parties to have a just and enduring peace."

The group's statement on June 18 said the talks "is a bridge of hope that principled negotiations may bear fruit and address the roots of the armed conflict."

Protestant pastor Irma Balaba of the Promotion of Church People’s Response said church groups "cannot over-emphasize the importance of addressing injustice in our society and uprooting the oppressive conditions and structures that move the marginalized to take up arms."

"We urge all Filipinos, attune your ears to the melodies of justice. Let us be part of this peace process and show the government that we want a long and lasting peace," Balaba said.

Rebel leaders and representatives of incoming president Duterte met in Oslo last week to prepare for the resumption of peace negotiations to end the decades long insurgency.

In a joint statement released on June 16, the peace panel and the rebel leaders agreed to include an amnesty proclamation for all political prisoners on the agenda of formal talks to start in July.

Previous talks between the government and the rebels broke down in 2011, with both sides insisting on preconditions before starting another round of formal negotiations.