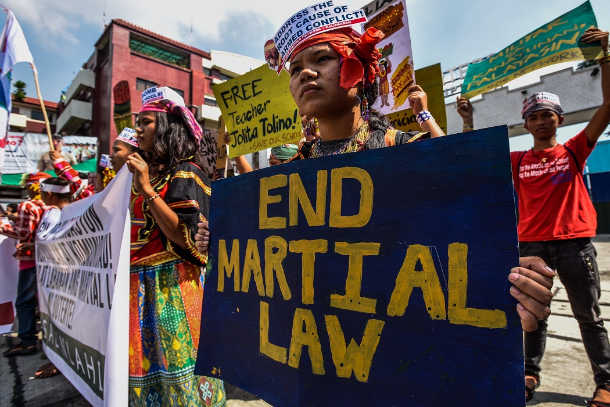 Tribal people hold a protest outside the Philippine military headquarters in Manila on Oct. 23 to demand an end to martial law in Mindanao. (Photo by Maria Tan)

Church people joined activist and tribal groups in protest marches in several cities across the southern Philippine region of Mindanao Oct. 23 to demand the lifting of martial law.

Protests were reported held in the cities of Davao, Cagayan de Oro, General Santos, and Butuan.

The resulting five-month conflict resulted in the displacement of close to half a million people, about 70,000 of whom remain in temporary shelters.

The Philippine Congress has twice extended martial law in the region, which is in effect until Dec. 31.

But activists under the banner of the Movement Against Tyranny said martial law had increased incidents of human rights abuses, such as arbitrary arrests and extrajudicial killings, by security forces.

"What our people need are affordable food, land to be tilled by our farmers, and jobs," he said.

Bishop Rhee Timbang of the Philippine Independent Church said even churches and church people are not spared from the "cunning ways" of Duterte.

He said attacks on his church, such as the arrest of one of its bishops last year, spurred clergy from several dioceses to join the anti-martial law protests.

The Protestant prelate said Duterte has been trying "to cow and silence [church people] on their social ministries and prophetic advocacies in favor of those who are in the margins."

Ryan Lariba of the group New Patriotic Alliance estimated that about 15,000 people joined the marches across Mindanao.

In a statement, the activist group said the government has turned the lands of Mindanao into "killing fields" with the killings of farmers, workers and tribal people.

The day before the island-wide protest, tribal groups held a protest outside government offices in Cagayan de Oro to call for action on issues faced by tribal communities.

They called for "genuine agrarian reform" and a stop to so-called development projects in tribal communities.