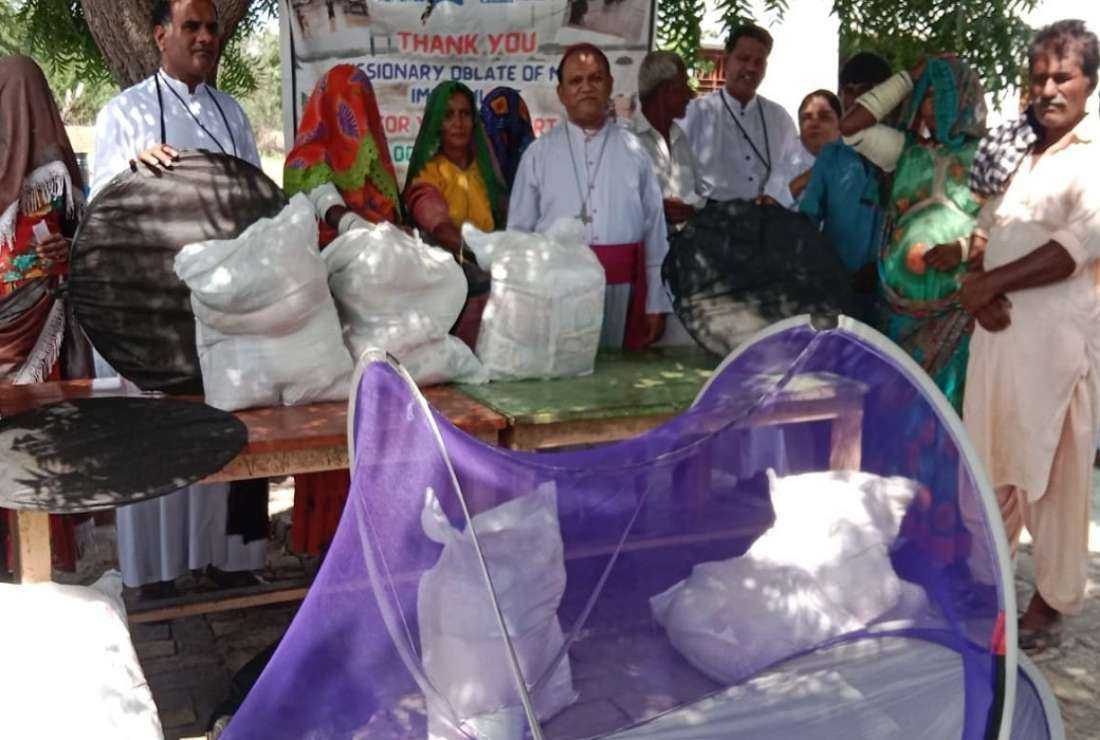 Parishes in Pakistan's Islamabad-Rawalpindi metropolitan area are providing aid to Muslims following unprecedented floods that have ravaged the country.

Father Nasir William, parish priest of St. Peter Canisius Church, handed over clothes and ration bags to 50 people on Sept 17 in Nowshera on the banks of the River Kabul, which surged last month.

Missionary Sisters of St. Thomas the Apostle helped the priest in reaching out to burqa-clad Pashtun women.

“It is a gift from the Christian community to our Muslim neighbors in times of need. I felt helpless as more were coming for help. Christian families, who reached out to us, have already received help from other organizations as per the beneficiary list shared by Protestant groups,” he told UCA News.

"Most local Christians are poor but not affected. We welcome foreign and local help. Humanity comes first."

"We reach out to the poor, vulnerable and excluded, regardless of race or religion"

Homes, roads, railways, crops, livestock and livelihoods have been washed away in the floods, caused by record rainfall during the monsoon season and melting glaciers in the mountains, which have so far killed 1,545 and affected more than 33 million people.

Caritas Pakistan Hyderabad (CPH) is sending 11 million rupees (US$46,420) to 550 flood-affected people, most of them Muslims and a few Hindus, in southern Sindh province through Easypaisa, a mobile money service. Each of the 250 households in the Halepota area of Badin district has already received 20,000 rupees.

The Church charity has registered 300 additional survivors for the cash aid in the coming weeks.

“These most vulnerable households were selected for assistance during the rapid need assessment in the affected Union Council. At district level response, we reach out to the poor, vulnerable and excluded, regardless of race or religion, as per our values based on the Catholic faith,” said Manshad Asghar, executive secretary of CPH, who distributed food packages and hygiene kits among 150 Christians in Matli parish on Sept 19.

“The mobile payment for cash grant aims at timely intervention as procurement of food and shelter will take a few more weeks.”

Nehal, a Catholic laborer from Bethlehem Colony in Mirpurkhas, 73 kilometers east of Hyderabad, was among 20 Christians who received food support from CPH on Sept 10. His mud house is leaking following two months of heavy rain. The father of four walks five kilometers to the vegetable market each day in search of work.

“The government has not given us a single morsel. Caritas food will last two weeks. We need more help"

“Daily wages have dropped as the whole city is dealing with damage and surrounding villages have had crops swamped. Laborers swarm to anyone who arrives to hire for manual work. Sometimes we have to wait all day for nothing,” said Nehal who is worried about his seven-year-old son suffering from malaria.

“The government has not given us a single morsel. Caritas food will last two weeks. We need more help”

Since July, Caritas Pakistan has reached out to thousands of flood survivors by providing cooked food to 2,300, ration bags to 1,300, hygiene kits to 250, nutrition kits to 500, non-food items to 450, emergency kits to 50, temporary shelter to 700 and 150 medical camps.

Non-food items include tools to clear debris, utensils and bedding. Emergency kits include a first aid box to ensure the safety of volunteers and members of disaster management committees. The shelter support comprises bamboo sticks, tents and tarpaulin sheets.

According to Amjad Gulzar, executive director of Caritas Pakistan, the beneficiaries include 1,500 Christians.

“We plan to reach out to 20,000 people during the emergency phase that ends in December. The rehabilitation phase and reconstruction will begin next year. We shall include a certain percentage of Christians in the next installment of the cash grant. They are focused more in response at parish level,” he said.

“Most beneficiaries are Muslims simply because they live in areas most affected by the disaster. However, our staff nationwide is aiding priests by linking concerned organizations with affected parishes.”

“There are no Christians among rural communities of southern Punjab; few reside in southwestern Quetta Apostolic Vicariate and rural parishes of Sindh. Half of our beneficiaries are Christians because of the appeals we received,” he said.

“The MPAs have no answer when asked about relief aid for Christians. Flood-related aid is also our right,” the prelate said.

Human rights groups say religious minorities were also excluded from several food aid programs during the coronavirus lockdown in 2020 in the Islamic republic where 60 percent of Christians live below the poverty line. Christians account for 1.6 percent of the population.

WEEKENDER
It's really a great and useful piece of information. I am glad that you shared this helpful info with uspolitical culture of pakistan
Reply