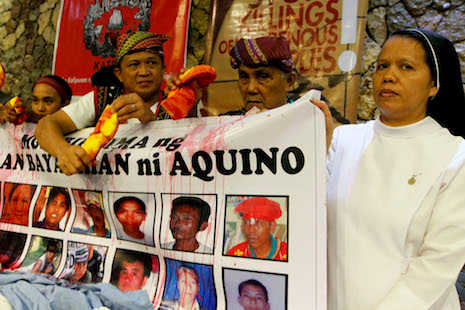 Benedictine Sister Theodora Bilocura (right) joins tribal leaders on Sept. 2 in calling for a stop to the killing of indigenous peoples in Mindanao. (Photo by Joe Torres)

Church groups working in tribal villages in Mindanao have accused Philippine soldiers of harassment and of maligning the credibility of a church investigation into the killings of indigenous peoples in the area.

"The military harassed the group that investigated (a) reported massacre last week," said the Rev. Christopher Ablon of the Philippine Independent Church, on Sept. 7.

Rev. Ablon said he received reports that the military labeled participants of a Sept. 1 fact-finding mission in Bukidnon province as "communist rebels."

"The military's allegation is meant to malign the credibility of the mission," said Rev. Ablon, spokesman of the human rights group Karapatan in northern Mindanao.

In Manila, the Missionary Benedictine Sisters of Tutzing, denounced the "militarization" being enforced on indigenous people's communities and schools in Surigao del Sur province following the killing of the director of a school for tribal children and two tribal leaders on Sept. 1.

The nuns said the deployment of troops in tribal villages in Lianga "curtails the children's right to education while being exposed to acts of violence thus leaving them traumatized."

"It is high time that on top of our voices we shout to the whole world in protest to bring to an end the loss of innocent lives by demanding that those behind these crimes be punished," the nuns said.

They called on President Benigno Aquino "to make true his intention of treading the right path... by respecting indigenous people's rights to ancestral domains."

The nuns also demanded the "dismantling of paramilitary groups involved in the government's counter-insurgency program" and the "immediate pullout" of the Army's 36th Infantry Battalion in tribal communities in Lianga in Surigao del Sur province.

The military, meanwhile, has denied it is behind the armed groups Magahat and Bagani that have been accused of attacking tribal communities in Mindanao.

"It's not part of our command and control," said Lt. Gen. Aurelio Baladad, head of the Philippine military's Eastern Mindanao Command.

Baladad made the statement after Gov. Johnny Pimentel of Surigao del Sur called on the military to "disband and disarm" the paramilitary groups.

The governor said members of the two groups were responsible for attacks on tribal communities in the past six years.

Sister Rowena Pineda of the Medical Mission Sisters said she joined the fact-finding mission in Bukidnon during the first week of September.

"Threats, harassment, and intimidation are not new," the nun said, adding that those who perpetrate human rights violations "use it to manipulate and block the search for truth."

The groups — composed of the Members of the Sisters' Association in Mindanao, United Methodist Church, Philippine Independent Church, Indigenous Peoples' Apostolate of the Catholic diocese of Bukidnon, Medical Mission Sisters, Student Christian Movement of the Philippines, and the Rural Missionaries of the Philippines — went to Pangantucan town to look into the reported killing of five Manobo tribesmen after a 15-year old tribal boy reported that soldiers killed his blind father, his two brothers, and two teenage cousins on Aug. 18.

"We are legal associations with proper documents," said Missionary Sisters of the Society of Mary nun Noemi Degala of the Sisters' Association in Mindanao.

Rev. Abon said the military "tried to prevent us from uncovering the truth" and are now "attacking the personalities of the participants of the mission."

"Their accusation is a big insult particularly to the priesthood and the members of the Church," he said.

A resolution has been filed in the Philippine Congress on Sept. 7 directing the House Committee on Human Rights to conduct an investigation into the killings of indigenous peoples in Mindanao.