Church groups back resumption of talks with rebels 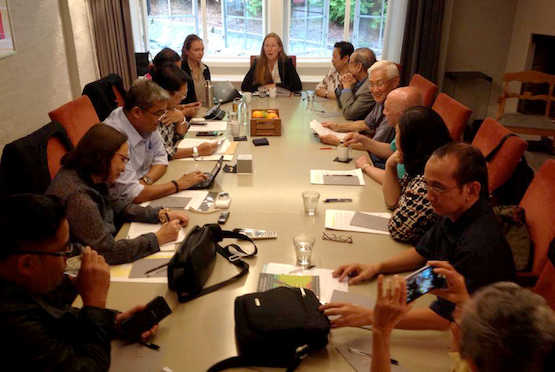 Leaders of the rebel group National Democratic Front of the Philippines and representatives of the incoming administration of President Rodrigo Duterte meet in Oslo on June 14 to prepare for the possible resumption of peace negotiations. (Photo courtesy of Edre Olalia)

By Joe Torres in Manila and Jefry Tupas in Davao

Church groups in the Philippines have expressed support for the resumption of peace talks between the incoming government and communist rebels.

"Addressing the roots of the armed conflict in the country by engaging in principled dialogue is a positive step forward," the Philippine Ecumenical Peace Platform said.

The group, an ecumenical formation of Philippine Catholic and Protestant Church leaders, expressed support for the efforts made by incoming president Rodrigo Duterte to resume talks with the rebels.

Rebel leaders and representatives of Duterte are meeting in Oslo, Norway this week to prepare for the possible resumption of peace negotiations to end almost 50 years of insurgency in the Philippines.

Father Edu Gariguez, executive director of the social action arm of the bishops' conference, said negotiations should address the roots of the insurgency.

"Poverty should be addressed to resolve the conflict," the priest said.

"In pursuing the peace agenda, both parties must talk about the welfare of farmers, the labor sector, and indigenous people," Father Gariguez told ucanews.com.

He said the talks should not only address the armed struggle but should "ask the question why people take up arms."

Jesus Dureza, who has been appointed head of the Office of the Presidential Adviser on the Peace Process, said he hoped this week's talks would lay solid foundations for future peace negotiations.

Peace talks between the Philippine government and the rebel National Democratic Front broke down in 2011, with both sides insisting on preconditions before starting another round of formal talks.

The informal meeting this week came after the rebel group announced last month that it is open to signing a ceasefire agreement with the incoming Duterte administration.

Details of the proposed ceasefire will be on the Oslo meeting agenda.

Exiled rebel leader Jose Maria Sison has expressed his willingness to achieve "peace immediately in the form of a mutual interim ceasefire."

He said the most crucial factor for the success of the peace process is "mutual determination" of the government and the rebels "to exercise the necessary political will to adopt long overdue basic reforms" in the country.

"We are ready to maintain the ceasefire and peace while we carry out the plan to accelerate the peace negotiations," Sison said.