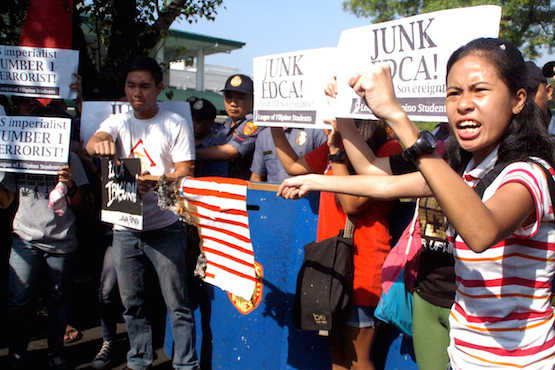 Activists burn a mock American flag during a Jan. 13 protest in Manila against the military agreement between the United States and the Philippines. (Photo by Rene Sandajan)

An ecumenical church group in the Philippines is protesting a court decision declaring as constitutionally binding a military agreement that allows increased United States military presence in the former U.S. colony.

"We are saddened by the court decision," said Nardy Sabino, spokesman of the Promotion of Church People's Response, a national alliance of church-based organizations.

The Philippines Supreme Court on Jan. 12 voted 10-4 to deny a petition of activists to declare the Enhanced Defense Cooperation Agreement unconstitutional.

Some legislators and anti-U.S. activists have denounced the deal, which was signed by both countries in 2014, as a de facto agreement that would make the Philippines a launching pad for military intervention in the region.

Aside from giving the U.S. military access to Philippine military bases, the agreement will allow U.S. troops to build facilities to store equipment for maritime security and humanitarian and disaster response operations.

Sabino said what the court saw was just the legality of the agreement but not its implications. "The deal will only worsen the dispute in the South China Sea," he said.

Beijing's land reclamation efforts in the South China Sea have raised tensions in the region, alarming Washington. The Chinese leadership claims almost all of the important water way as its own sovereign territory. Washington has said it will support both its allies in the region and international norms in relation to freedom of the seas. Student activists in Manila on Jan. 13 protest a military agreement between the United States and the Philippines. (Photo by Rene Sandajan)

Bishop Dinualdo Gutierrez of Marbel, who has expressed opposition to the military agreement, urged Catholics "to pray against war and other forms of threats to God's creation."

"War is not good. It is destructive. It destroys God's creatures. We need to protect lives," the bishop told ucanews.com Jan.13.

He said the Philippine government should prioritize its antipoverty programs instead of military alliances.

Archbishop Angel Lagdameo of Jaro said the agreement is a manifestation of how some Filipinos want to be "stateside" or go to the United States.

"We cannot change history. Filipinos want to be stateside in many ways, even those who do not go to the U.S.," he  said.

Although the Philippines was an American colony for only half a century, U.S. presence and influence in the country continues.

Bishop Honesto Ongtioco of Cubao said Filipinos should leave the issue of the military agreement to the government. "I trust our civil leaders that they will make a good decision," he said.