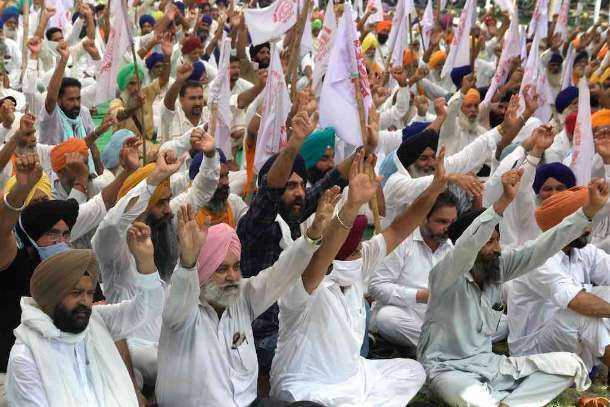 Indian farmers are bracing for another major showdown with the federal government after accusing its new farm laws of ignoring their interests and promoting multinational firms.

A church-backed body has joined farmers' unions in asking the government to withdraw two laws that parliament passed on Sept. 20. The government, led by Prime Minister Narendra Modi's pro-Hindu Bharatiya Janata Party (BJP), said the Farmers' Produce Trade and Commerce (Promotion and Facilitation) Bill, 2020, and the Farmers (Empowerment and Protection) Agreement of Price Assurance and Farm Services Bill, 2020, are measures to reform the farm sector.

But "the new laws are a real threat to the farm sector and the farmers," said Father Joseph Ottaplackal, chairman of the Indian Farmers Movement (INFAM), a church-backed body based in southern India's Kerala state. The new laws will deprive the farmers of the minimum support price that the government assures them for their produce, he told UCA News. The laws permit the winding up of existing government-assisted marketing systems, contract farming and multinational investments in the farming sector. More than 70 percent of India's 1.3 billion people directly or indirectly depend on farming for their sustenance. But some 80 percent of them — over 700 million — are marginal farmers with less than two hectares of land. "These marginal small-time farmers will not be able to bargain with corporate firms. Big companies will take advantage and determine the price of produce, and farmers will not be able to bargain with them," Father Ottaplackal said. The reforms threaten the very existence of marginal farmers as big companies will not be interested in entering into any contract farming with them, he added. INFAM was formed in 2000 to address farmers' issues and to encourage farmers to adopt new methods to make agriculture a profitable occupation. Modi rebuts such concerns and said the government would continue to pay the minimum support price. He said the laws would liberate farmers from the clutches of intermediaries and trade agents who earn millions. BJP leaders said the trade agents who are afraid of losing their business are instigating farmers' protests and creating trouble to force the government to withdraw the laws. Farmers' unions have already taken to the streets opposing the laws and announced several national-level programs to protest. Hundreds of farmers and farm laborers marched through the streets of Bengaluru city in southern India on Sept. 21, shouting slogans against the government's policies. Farmers in several cities of Punjab protested and burned effigies of Modi. Federal minister Harsimrat Kaur Badal, a leader of the Sikh-dominated Akali Dal party from Punjab and an alliance partner of the BJP-led government, resigned in protest at the new farm bills on Sept. 20. Avik Saha, co-founder of the Swaraj India political party, said the farmers "fear the worst" and "that is why the farmers are fighting back hard, and they will either win or die — that's their position." Saha, the point-person of his party on agricultural issues, told a news portal that if the government proceeds "with this nonsense, then the market will be captured and monopolized by very large business houses." The opposition Congress party has announced a nationwide strike next month against the government's anti-farmer policies. India has a history of peasant uprisings since British colonial times. Since it came to power in 2014, the Modi government has been accused of using policies that support big companies at the cost of farmers and the poor. India has witnessed at least three major protests from farmers in the past six years of the government. In his 2014 election campaign, Modi promised to bring "achhe din" (good days) for all, particularly farmers. But farmers' leaders say he has failed to keep any of his promises. According to National Crime Records Bureau data, distress in the farm sector led to the suicides of 12,360 farmers or farm laborers in India in 2014, up from 11,772 in 2013.  Since 2015, the government has not published any data on farmer suicides.