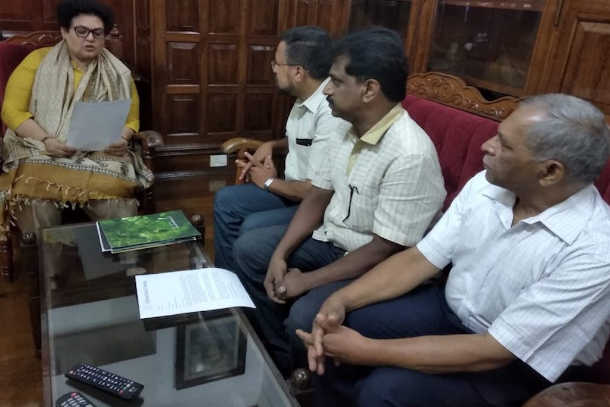 A Christian delegation meets with Rekha Sharma, chairwoman of the National Commission for Women, in Kochi on Dec. 1 seeking the federal body's intervention in providing security for nuns fighting for justice for a nun allegedly raped by a bishop. (Photo supplied)

India's National Commission for Women has accused Catholic Church officials of failing to support and protect a nun who has accused a bishop of raping her.

Chairwoman Rekha Sharma told media in Kochi city on Dec. 1 that the official church was "glorifying" Bishop Franco Mulakkal of Jalandhar while failing to protect the alleged victim.

"They [church officials] are glorifying the accused bishop," Sharma said after meeting a delegation of Catholics who sought the commission's intervention to provide security for the nun and her supporters in a convent.

Sharma alleged that church officials were not listening or acting to protect the nuns. The church has also failed by not having an internal system to report sex abuse, she said.

"There was nobody she [the nun] could go to and complain. We have also written to the church urging them to constitute internal complaint committees where women can complain," she said.

The 48-year-old nun, former superior of the Missionaries of Jesus congregation, complained to Kerala police in July that Bishop Mulakkal raped her 13 times between 2014 and 2016.

Five other nuns, who belong to the congregation that functions under the bishop's patronage, held a public protest calling for the bishop's arrest. He was arrested on Sept. 21 but a court bailed him on Oct. 15.

Bishop Mulakkal has consistently denied all the allegations and claimed that the nun is taking revenge against him for initiating disciplinary action against her violation of her religious vows of obedience and chastity.

Protesters are now demanding revocation of the bishop's bail on grounds that his freedom could endanger witnesses, including the alleged victim, and hamper justice.

A Christian delegation met Sharma seeking the commission's intervention to protect the nun and her five colleagues at their convent after their congregation refused to cooperate with police to improve security.

Delegation leader Riju Kanookaran, who leads a group working for transparency in the church, said Sharma agreed to take up the issue with the federal government led by the pro-Hindu Bharatiya Janata Party.

The lay group's move came after Sister Regina, the present superior of the nuns' congregation, wrote to police to say that it does not have the resources to tighten security around the convent and suggested that the nuns who feel threatened can be moved to a government shelter home.

Police had asked her to install two night-vision CCTV cameras, cut the branches of trees near the convent and cover two wells, among other things.

Sister Regina told police that the congregation did not have funds for the work, while installing cameras would affect the privacy of people living in the convent and the orphanage attached to it.

The nuns supporting the alleged victim told ucanews.com that the congregation wants to force them out of the convent for going public against the bishop.

Sister Anupama, one of the five nuns who publicly protested, said they began to fear for their lives after the death of Father Kuriakose Kattuthara, a priest in the bishop's Jalandhar Diocese. The priest, who had testified against the bishop, was found dead under mysterious circumstances a few days after the bishop was released on bail.

"The proposal to move us to a shelter home is an attempt by Bishop Mulakkal and those supporting him to oust us from this convent," Sister Anupama told ucanews.com. "The moment we move out of the convent, they could declare us as leaving the professed life and dismiss us from the congregation."

Sister Anupama claimed that the congregation was "doing everything possible" to "harass and threaten us so that we should withdraw from the case against the bishop."

She also said the congregation's claim that it has no money for security cameras cannot be taken seriously when it spent "thousands of rupees" to "fly around to defend the bishop."