Catholics in Asian nations offer hope and support to communities in distress amid conflict, oppression and the pandemic.

Amid ongoing airstrikes and artillery shelling by the military, the Catholic Church in Myanmar is supporting and sheltering people fleeing their homes in Christian-majority states.

One of which is Loikaw city, the capital of Kayah state, where hundreds of homeless people are given food, non-food items and shelter. At least 50,000 people have fled their homes in Loikaw to escape military attacks.

Some 300 displaced people are sheltering at the compound of the Christ the King Cathedral Church here. As the fighting with ethnic rebels and civil defense forces escalates, the military continues to target churches and civilians.

This week two people including a mentally disabled man were shot dead and three were severely beaten during a military raid on Catholic-majority Chan Thar village in the Sagaing region. At least 1,400 civilians have been killed in a crackdown since the military coup in Myanmar last February. 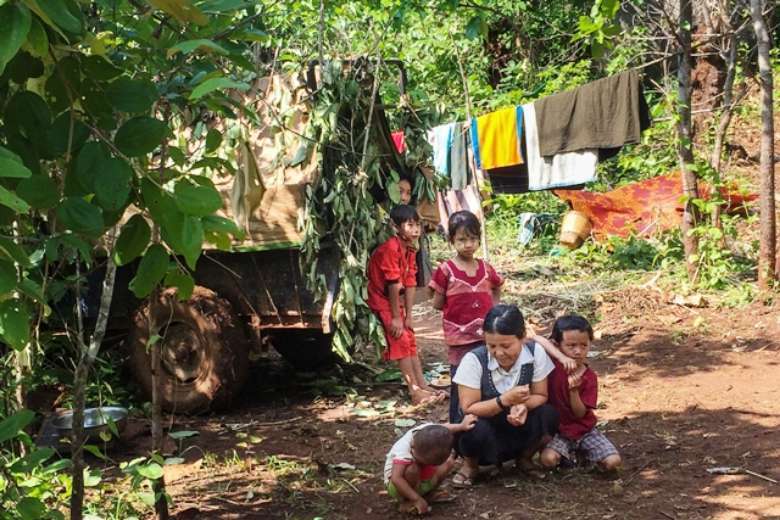 Covid 19 new variant is reliving one of the worst experiences migrant workers in India had in decades. As the cases increase they have started a mass exodus from cities to rural homes in what they assume to be another nationwide lockdown in the horizon.

Migrants have been lining up in bus terminals and railway stations across the country as India grapples to contain the Omicron variant. In federal capital New Delhi, the daily Covid tally has passed 20,000 cases, triggering the very fear of yet another lockdown. Already Delhi authorities have imposed night and weekend curfews to contain the virus. Church officials say workers are desperate to avoid the same fate as two years ago when they faced hunger and disease in their struggle to go home. The exodus of migrants became a humanitarian crisis in 2020 when thousands walked on roads and railway tracks amid a transport ban.

At least 16 were killed by a goods train in Maharashtra state and at least 100 died in road accidents across the country. According to the 2011 census, migrant workers make up 37 percent of India’s population.

Pakistan authorities have come under intense criticism after at least 23 people including 11 children died from asphyxiation in trapped vehicles following heavy snowfall in a popular hill resort.

Thousands of vehicles were stranded as tourists rushed to view the winter snowfall at Murree, a mountainous resort in the Galyat region of Punjab. The tragedy last weekend was blamed on the apathy of local people who exploited the tourist attraction to make money from their businesses and services at excessive prices. Workers use heavy machinery to clear a road following a blizzard that trapped visitors in vehicles along the roads to the resort hill town of Murree, 70 kilometers northeast of Islamabad, on Jan. 9. (Photo: AFP)

Activists have also cited a serious lack of disaster risk management awareness and emergency response mechanisms among vital reasons behind the loss of lives.

The Human Rights Commission of Pakistan blamed the government for the tragedy for failing to ensure an early warning system, traffic regulation and effective rescue operation.

Catholics in Sri Lanka marked the 1,000th-day commemoration of the Easter Sunday bombings by demanding truth and justice for the victims. Hundreds of Catholics including priests, nuns and laypeople joined a national prayer and rally at the National Basilica of Our Lady of Lanka on Friday. Following a protracted government investigation, police have filed charges against 25 men accused of plotting the bombings, including conspiracy to murder. The court trial began last November.

The Sri Lankan Church led by Cardinal Malcolm Ranjith has rejected the inquiry report as it failed to reveal the “real culprits” behind the blasts and alleged attempts to cover up the crime.

A Catholic group advocating for peace in the Mindanao region of the Philippines has called for calm after a deadly bus bombing. A child was killed, and six others wounded on Tuesday when a bomb exploded on a public bus.

The region is a haven for various armed groups ranging from communist insurgents to Islamist militants. Police said an improvised explosive device was planted in the rear section of the bus. No one has claimed liability for the attack. A Muslim imam prays at an empty mosque in Cotabato City in southern island of Mindanao on May 22, 2020, ahead of Eid-al-Fitr. (Photo: AFP)

However, the incident has led to anti-Muslim sentiment on social media. Mindanao for Peace Fellowship, which promotes peace and dialogue among Muslims and Christians, begged Catholics not to call Muslims “terrorists” and to refrain from describing the religion unfairly.

Mindanao, the second -largest island in the Philippines, has been plagued by a long-running insurgency. Thousands have been killed and millions displaced amid armed conflict between insurgents and government forces.

A Catholic group in Vietnam has been helping dozens of women to overcome their post-abortion trauma and grief. Father Dominic Truong Van Quy set up the Pro-Life Group in north-central Thua Thien Hue province in 1990.

The group has 43 members who visit, comfort and help women who had to undergo abortions. Members include those who were deserted by men and forced to go for abortions. They are provided an opportunity to get over the emotional distress and improve their material life. Members volunteer to collect aborted fetuses from public hospitals and private clinics, bury them at cemeteries and educate the local people to respect life which is a gift from God.

Father Quy uses his family’s 5,000-square-meter plot of land on a hilly tract to bury aborted fetuses. It currently has 46,000 fetuses. The group has also rescued about 2,000 babies from abortion in the past 30 years.

Minority Catholics in Kazakhstan continue to pray for peace as the massive political crisis in this Central Asian country refuses to settle down. It has left at least 164 dead, dozens injured and thousands arrested.

On Thursday, Catholics joined a special prayer for peace and eternal rest of the victims who died in the deadly unrest. Anti-government protests erupted on January 2 following a steep hike in fuel prices. The protests turned violent, highlighting political grievances against the ruling authoritarian government of President Kassym-Jomart Tokayev. A Ukrainian woman holds a placard during an action dubbed #SayNOtoPutin in Kiev on Jan. 9. (Photo: AFP)

To quell protests, President Tokayev declared a nationwide state of emergency and summoned troops from the Collective Security Treaty Organization, a NATO like but Russia-led security alliance of ex-Soviet states.

Kazakhstan is a landlocked Muslim-majority country of about 19 million people, rich in natural resources including gas and oil reserves. Since gaining independence from the Soviet Union 30 years ago, Kazakhstan has been ruled by authoritarian regimes accused of creating a massive wealth gap, corruption, and a lack of democracy. An estimated 250,000 Catholics live in Kazakhstan.

A Christian politician in Indonesia faces up to 10 years in prison after being charged with hate speech for allegedly making offensive social media comments.

Ferdinand Hutahaean from the Democrat Party was arrested on Monday after an outcry from Muslims over a comment on Twitter in which he allegedly taunted Muslims by calling their God “weak.” He was detained after two Muslims filed complaints with the police accusing him of insulting Islam. This is the latest in a series of social media posts that have sparked uproar in Indonesia recently. Last month Joseph Suryadi, a 39-year-old Christian, was charged with blasphemy for allegedly insulting Islam by comparing Prophet Muhammad with an alleged child rapist.

In August, police arrested Muhammad Kace, a Christian YouTuber, after a series of complaints were filed by Muslims accusing him of blasphemy after he claimed Prophet Muhammad was “surrounded by devils and liars.”

A court in Communist China has upheld a seven-year jail term for a Christian online bookstore owner who was sentenced a couple of years back on charges of selling Christian religious books illegally. Linhai City Court in Taizhou in Zhejiang province dismissed the appeal and confirmed the sentence against Chen Yu, the head of Wheat Bookstore.

Chen was arrested in September 2020, and charged with “illegal business operation” for selling Christian books. He was sentenced to seven years in prison and fined 200,000 yuan which is close to 31,400 US dollars. Chen has been a popular figure with Christians in Zhejiang and other places. He allegedly sold over 20,000 books, mostly Bibles and other Christian religious books. He had clients in various provinces of China including Henan and Shandong.

Rights groups say the harsh sentence against Chen shows that “Beijing is frightened by all things religious” while the Chinese Communist Party continues to intensify its crackdown on religions and religious activities. Who will be held responsible if war robots kill humans?