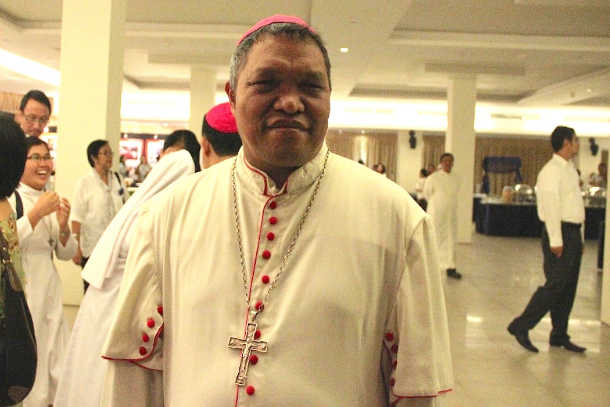 An Indonesian prelate forced to resign last year amid accusations from his own priests that he embezzled church funds and had an affair with a woman has been reassigned to another diocese, sparking criticism among church officials and laypeople.

In a surprise move, Bishop Hubertus Leteng, former bishop of Ruteng on Flores Island was reassigned to serve in Bandung Diocese in West Java.

"Bandung's bishop was authorized to give him the opportunity to serve with full status as a bishop, but without a bishop's crosier," Father Siprianus Hormat, executive secretary of the Indonesian bishops' conference told ucanews.com, referring to the hooked staff that symbolizes ecclesial territory.

Since Bishop Reteng's resignation in October 2017, Bishop Antonius Subianto Bunjamin of Bandung, who investigated the allegations, has been tasked with keeping him under Vatican supervision.

Bishop Leteng resigned after 69 priests in Ruteng Diocese submitted their own letters of resignation in protest against him for allegedly borrowing US $94,000 from the Indonesian bishops' conference and $30,000 from the diocese without providing an accountability report.

The bishop said the money was being used to fund a poor youth's education in United States, but refused to provide further details.

Rebel priests suspected the money went to a woman they alleged the bishop was having an affair with.

The supposed affair surfaced in 2014 after a former priest went public with the allegation.

In August, the Vatican appointed Bishop Subianto to investigate the case, which led to Bishop Leteng's resignation.

The Vatican did not give a reason for the resignation. However, church sources later said Leteng was told to return the money and sever ties with the woman.

News of Bishop Leteng's reassignment was met with surprise and criticism.

Father John Mansford Prior, missiology lecturer at the Catholic School of Philosophy in Ledalero, criticized the Vatican's handling of the case, saying there was no formal explanation as to the nature of Bishop Leteng's case and how it was handled.

According to Father Prior, if the reassignment was considered part of efforts to forgive his wrongdoing, it should only have come after he has confessed his sins, vowed not to repeat them and accepted absolution.

"Leteng may have examined his conscience, [but] he hasn't admitted his mistake," Father Prior told ucanews.com.

"This is a bad precedent for the church, as if such a scandal is not something serious, but a minor offense," he said.

Jashinta Hamboer, a laywoman who had written an open letter demanding Bishop Leteng to resign, said his reassignment was shocking.

"Perhaps what he did is now already considered a normal thing in the church," she said.

The way this has been handled has weakened the church's position in efforts to fight corruption and foster accountability and transparency, she said.

"It will lose its value, when inside the church itself, such problems are not considered a serious problem," Hamboer said.

She hoped Bishop Leteng will not create similar problems in Bandung Diocese.