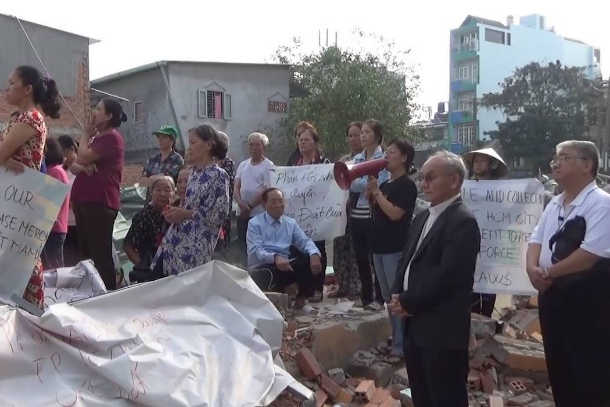 A retired bishop and priests in Vietnam have called on people evicted from their farms to join wider efforts to build a more just society.

On Jan. 4, hundreds of police and officials destroyed farmers' houses on five hectares of land in Tan Binh district in southern Vietnam.

About a dozen people were detained after roads leading to the scene were blocked.

One man reportedly tried to prevent authorities from demolishing his home by lying on the ground in front of a bulldozer.

Many locals gathered to pray before a Marian statue nearby and some priests visited victims of the raid.

Authorities accused people who have cultivated crops there for 65 years of illegally building houses on land needed for the building of schools and other public facilities.

The government announced early in January that they would demolish 84 houses.

Victims told them about the brutal eviction.

"May God bless you," Bishop Oanh told them.

"You are struggling not just for the land but for justice and truth to be respected in our country."

He also urged them to "act like God's children."

Bishop Oanh, who is known for speaking out against the government's violations of religious freedom and human rights, led the congregation to sing hymns and pray in front of the Marian statue. And he offered worshippers a bag of candy.

Father Thanh said local people are looking for the truth and justice like the 'three wise men from the east' coming to honor the infant Jesus.

Father Thanh said he had been stopped by security officials and then taken back to his monastery when he tried to visit victims after the destruction of Jan. 4.

Local people said they strongly protested the government's eviction from their land where they had grown vegetables for a living since 1954 when the local church offered them land after they moved from northern Vietnam.

They said they used the land without conflict with anyone and the government had never previously stated that the land belongs to it.

In 2001, government officials verbally informed them that they decided to take away the land from them.

They said they petitioned the government to grant them ownership, but were ignored.

In recent years they had not been able to cultivate the land because it was inundated by heavy rains.

They instead built temporary houses in order to earn a living by renting them out.

"We continue gathering to pray for Mother Mary to protect us and our properties," a woman said.

"We will be ready to die on our land because we have shed tears and blood on the land for generations."