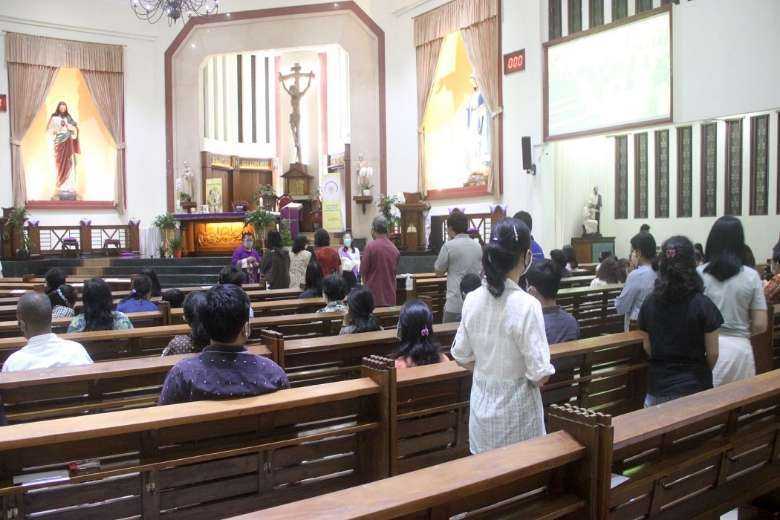 Jakarta Archdiocese is to allow children and elderly people to resume attending public Masses but under several conditions during the Covid-19 pandemic, a church official said.

Father Samuel Pangestu, the archdiocese’s vicar general and head of its Covid-19 prevention team, said in a letter issued on May 5 that the decision was based on the current situation in Indonesia where the Covid-19 vaccination drive is in full swing to achieve herd immunity.

The government kicked off the vaccination drive in January.

It began by targeting medical workers, policemen, military personnel and other public servants as well as those aged over 60. Those economically and socially affected by the pandemic will be next, followed by the rest of the population. It is hoped immunization will be wrapped up by March next year.

“Only children and teenagers aged from 10 to 17 who have received the Sacrament of Holy Communion are allowed to attend public Masses, and they must be in good health,” Father Pangestu said in the letter, distributed to all parishes in the archdiocese.

“They must be registered by their families on the archdiocese’s website and be accompanied by adult family members.”

He said those aged 60 and over who are in good health are independently mobile can attend Masses on Saturdays.

“They must obtain a consent approval letter from their families and have had the first and second doses of Covid-19 vaccines,” he said.

Father Pangestu called on parishes to submit social distancing proposals before May 12 to accommodate the return of children and the elderly to churches.

“I have not told my son yet but I believe he will be excited as he’s not overly thrilled with joining livestreamed Sunday Masses,” she told UCA News.

Jakarta Archdiocese resumed holding public Masses in July last year after they were closed the previous March due to the pandemic.

However, only those aged between 18 and 59 were allowed in churches, which were limited to only 20 percent of capacity.

“I have no worries about it because the archdiocese has strictly followed health protocols,” Hidajati said.