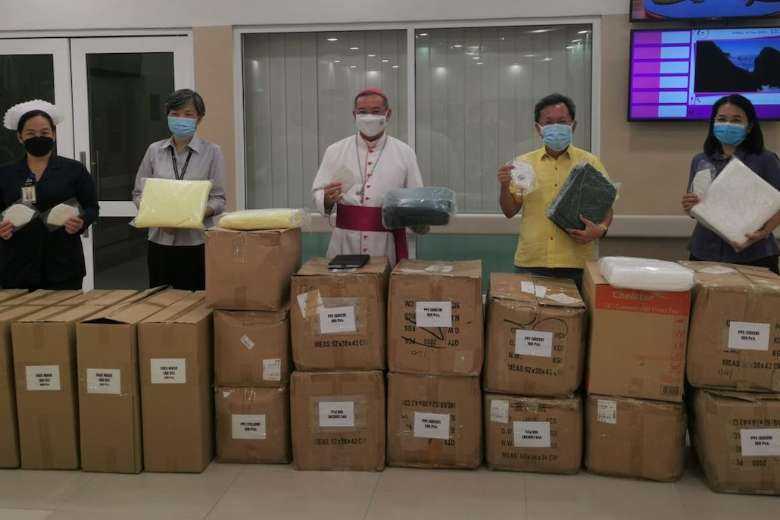 Catholics in Malaysia's Sarawak state have donated medical equipment to a government hospital as the country grapples with rising cases of Covid-19.

Archbishop Poh said he was grateful for the “generous contributions from Catholics and friends throughout Sarawak, Malaysia and overseas,” reported Today’s Catholic, the official publication of Kuching Archdiocese.

“We want to contribute towards protecting our medical personnel,” the prelate said during the handover.

The donations were collected in collaboration with Bishop Joseph Hii of Sibu and Bishop Richard Ng of Miri who joined in following an appeal from Archbishop Poh last year seeking to procure PPE to assist frontline doctors and health workers.

The Church’s gesture of solidarity comes amid a rising tide of Covid-19 cases in the Southeast Asian country in recent weeks, with Sarawak state in Borneo being among the worst-hit territories.

The government has extended the ongoing total lockdown to June 28, while a mass vaccination drive has been rolled out with more than 13 million citizens already registered for inoculation.

Prime Minister Muhyiddin Yassin has faced criticism for mishandling the Covid-19 response amid a political fiasco and power battle between the ruling and opposition alliances.

Rumors are rife that the PM’s future hangs in the balance as King Abdullah of Pahang convenes a Conference of Rulers (COR), a royal body made up of the king and eight hereditary sultans of four states, on June 16.

Media reported that the COR might find a middle ground to keep Muhyiddin at the helm despite his failure to break the political deadlock and poor handling of the pandemic. Political analysists have also speculated he might be removed and replaced by Foreign Minister Hishammuddin Hussein or at least Hishammuddin might be promoted to deputy prime minister.

Against such odds, Muhyiddin unveiled a four-phase Covid-19 national recovery plan on June 15.

In a televised address, the premier said that Malaysia might gradually open up its economy, social sectors and parliament from September.

Depending on current projections, Malaysia’s economy would be fully opened by the end of October, he said. Due to the pandemic as well as political setbacks, the federal parliament and 13 state legislatures have not had a single sitting this year.

"We cannot continue like this. We need to exit this crisis as soon as possible," Muhyiddin said, adding that the ongoing lockdown is costing the government 1 billion ringgit (US$320 million) a day.