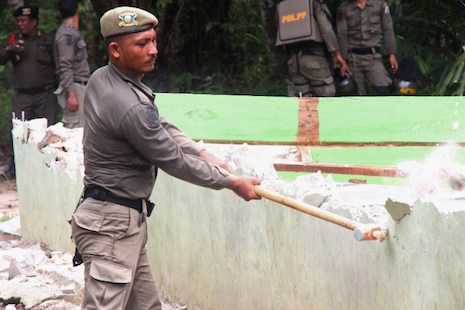 An Indonesian official takes a sledgehammer to a church wall during a demolition in Aceh Singkil district in Aceh province on Oct. 19. (Photo by Dian Majni/AFP)

Authorities in Indonesia's Aceh province have started tearing down illegal churches in a tense district, leaving Catholics in at least three mission stations without a home for religious services.

The move comes after Muslim fundamentalists torched a Protestant church in the area, sending hundreds of Christians fleeing and sparking violent clashes.

On Oct. 19, a Catholic mission station and two Protestant churches were demolished by members of the Aceh Singkil district's public order agency. Authorities said the demolitions were in line with an agreement between Christians and local officials to close places of worship that do not possess required permits.

The mission station was served by St. Lucia Parish of Pakpak Bharat district in the neighboring province of North Sumatra.

Prior to the demolition, he said, he called the mission station to see if there was something that could be done to obtain a permit. "The Catholic told me that obtaining a permit was a difficulty they had faced for a long time. The congregation had tried but the permit wasn't issued," he said.

Advocates for religious minorities in Indonesia say onerous government regulations on places of worship have often been used to target followers of minority religions, including Christians. A 2006 decree, for example, stipulates that in order to build a place of worship, officials must get signed support from 60 local residents and the approval of the village head. Local regulations in Aceh are even more strict, demanding signatures from 120 people.

As a result, churches in areas with a strong fundamentalist Muslim presence are often denied the proper permits.

It was this controversy over acceptable places of worship in the district that triggered Oct. 13 violence that saw a mob burn down a Protestant church. One person died and dozens of others were injured in ensuing clashes.

District officials told media that local Christians and authorities on Oct. 12 had agreed to the demolition of 10 small places of worship. But the decision angered Muslim fundamentalists, who wanted the demolitions to happen immediately.

"They didn't feel afraid. They just felt said. It can't be said in words," he said.

Two mission stations in Lae Mbalno and Napagaluh villages will also be torn down, according to Father Pandiangan.

"If the mission stations are torn down, Catholics will hold services at home. I heard that local people allow the faithful to pray at home at night. So Sunday services will be held at home," he said.

Abdullah, who heads the Aceh Singkil district's public order agency, confirmed that 10 churches in total were targeted for demolition.

"I saw some women and men crying when their churches were torn down," he said. "As a human being, I also felt sad. But what can I say? It's the policy."