Congregation vows to fight on 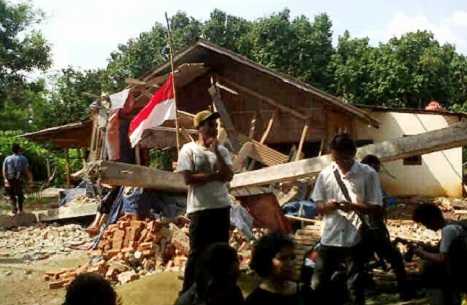 The ruins of the demolished Batak Protestant Church

Members of a Protestant congregation in West Java have vowed legal action and to mark Holy Week as best they can, following the demolition of their church by authorities last week.

About 400 members of the Batak Protestant Church (HKBP) in Setu, Bekasi district, were forced to attend Sunday worship in a field at the weekend.

“We will keep holding prayers, including on Good Friday and Easter Sunday, outside our demolished church,” Reverend Torang Parulian Simanjuntak, a pastor at the church said on Monday.

He questioned the legality of the demolition and called for an explanation by local authorities as to why the bulldozers were sent in.

“We will file a lawsuit soon against the Bekasi district administration,” he said.

However a local government official said last week, before the demolition took place, that renovation work started last October to enlarge the church was illegal and that action would be taken.

The demolition on Thursday was the latest incident in a long-running dispute between the church and local authorities over a building permit for the structure.

Local authorities say the church was built illegally in 1999 without a permit and that an application submitted 12 years later in 2011 was invalid.

Authorities say the application lacked the required number of signatures from local Muslims approving the structure.

In Indonesian law 60 signatures are required in order to qualify for a building permit.

“We see that this was an effort taken by the village head to ignore what is written in the law,” he added.

The director of the Jakarta Legal Aid Agency, Febi Yonesta, says the local authorities have a case to answer.