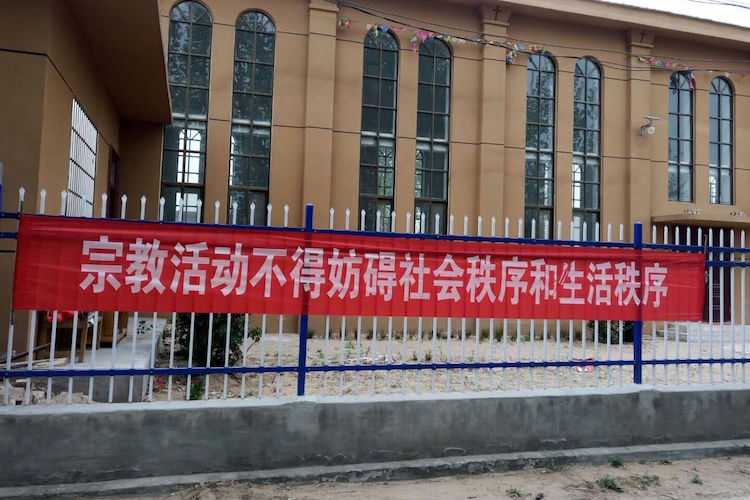 An official notice posted outside a church in Henan says: "Religion must not interfere with life and social order." (Photo supplied)

After blocking minors from churches and seizing church-run kindergartens, Beijing's crackdown on Catholic and Protestant churches is intensifying in seven dioceses out of 10 in China's central Henan province with churches demolished and raided as well as hundreds of Bibles and holy books confiscated.

In one example, a source told ucanews.com that a Catholic church and the priests' residence were demolished in Hutuo village of Xicun town of Gongyi City of Luoyang Diocese on April 17. The church's priests were also driven away.

Hutuo village was the hometown of late "underground" Bishop Li Hongye, who was appointed by the Vatican but not recognized by the government's Chinese Catholic Patriotic Association. For a second time the bishop's tombstone was demolished on April 17. It was first destroyed in 2011, only 10 days after he had been buried but it was later reinstalled.

Two underground priests from the same diocese were driven out of their parish on April 1 and their belongings plus church property were confiscated, another source told ucanews.com.

"I also heard that the authorities also encouraged people with rewards if they reported that the two priests went back to gather the sacraments or to celebrate Mass," said the source.

The above video shows the remains of a church and a priests' residence in Hutuo village of Xicun town of Gongyi City of Luoyang Diocese. The village is the hometown of late underground Bishop Li Hongye.

At the Beixishangcun Catholic Church of Xinxiang Diocese on April 18, children's Bibles and holy books were taken away by security personnel. The authorities also asked to remove the church's cross and took over the church's entire finances.

Officials stormed several churches in Zhengzhou Diocese and drove children away during Easter Sunday Mass. Since then, police vehicles have been stationed outside churches every Sunday, and at least three officers have blocked minors, and even babies, from entering the churches in each of the diocese's parishes.

On April 17, Xincun Church in Anyang Diocese was investigated by local officials — including public security — who took away sacred objects and forcibly demolished the cross. Gaoqiangying Church of Huaxian county in the same diocese was visited twice by officials who confiscated holy items and drove away the church guard. They also posted notices and placed officials outside churches to block minors on Sundays. Church-run kindergartens in the diocese were closed. School students were asked to report on their beliefs and parents had to go to school to register to register their children. In Shangqiu Diocese, authorities made door-to-door visits to tell people that believing in religions is prohibited. People were told that if anyone was against this policy, their children would not be allowed to attend school and subsidies for the elderly would be deducted. They were also told that if the authorities found that they still offended, they would be expelled from their job and no wages would be given to retirees in the same family. Religious couplets posted on the front door of homes were additionally smashed.

At Qixian Catholic Church of Kaifeng Diocese a banner was hung outside which stated: "Qixian's anti-cult warning: no education and propaganda in Catholic Church." In this diocese religious organizations were likewise prohibited from preaching to minors. Sources said that the crackdown is being overseen by the province's new chief, Communist Party Secretary Wang Guosheng. State-run Xinhua News Agency said that Wang, 62, replaced predecessor Xie Fuzhan in mid-March. Xie, who is said to be a factional follower of President Xi Jinping, held the position only for two years, which is a shorter than usual period for a province with such a large population.

"The governor was criticized and the provincial party committee secretary was replaced," a source told ucanews.com. The source said this occurred after officials visited the province and found that many Protestant churches had been set up in poor Xihua county and Luoning county. These officials found that house churches — the name for informal Protestant services not held in churches — had grown rapidly across the province.

"The replacement Wang has been busy and says he will only take a year to rectify the province," of unregistered churches, said the source.

According to sources, Henan province began to "rectify" the five official religions in December last year. But since the beginning of April the Catholic Church has been severely suppressed.

It still remains unclear whether the stepping up of persecution in Henan is just a localized issue or a test run for a broader inter-provincial campaign. One source summed up the extent of the church persecution in Henan. "Now, the Catholic Church and believers in Henan are persecuted every day, and there is no religious freedom at all," he said.

According to various sources, seven dioceses out of 10 in Henan, with roughly 167,700 out of nearly 300,000 Catholics, have been affected by government action since Wang came to Henan. In 2009, the Christian population in Henan was 2.4 million, of which 300,000 were Catholics. There are 1,100 registered Protestant churches and more than 5,000 legally registered gathering places in the province, but the number does not include house churches.

Catholics in Henan suspect that the suppressive measures have been directed by the central government in Beijing. Sources said that the provincial party committee has asked local deputy secretaries to take the lead in the suppression. If any problem occurred during its implementation, local deputy secretaries were told to first hold cadres accountable and then churches, sources said.