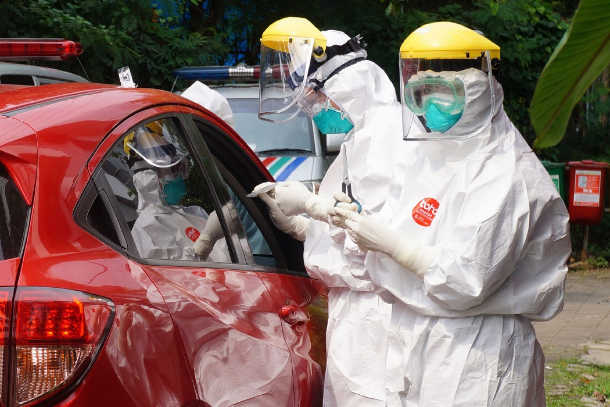 More than 200 members of a Protestant church in Indonesia’s West Java province have tested positive for Covid-19, while more than 300 police cadets have also tested positive, according to the provincial governor.

He said there were initially seven positive cases in Sukabumi city before the RDTs were carried out, while a GBI pastor had previously tested positive for Covid-19 and had direct physical contact with his congregation at a church gathering before he and his wife passed away from the disease in late March.

Kamil also said his administration will soon conduct polymerase chain reaction tests (PCRs) for those who tested positive for Covid-19 to get more accurate results.

In a two-page letter received by UCA News on April 6, the West Java chapter of the GBI said the gathering on March 3-5 was an internal program which had been planned by the GBI long before the government announced the first two confirmed Covid-19 cases in Indonesia and called on religious followers to worship at home.

“We did not mean to disobey the central government’s call. We have conducted all Sunday worship at home since March 22. Also, all meetings have been conducted online. These rules apply not only to the GBI in Bandung and West Java province but across Indonesia and even overseas,” Reverend Satrya, chairman of the GBI’s West Java chapter, said in the letter.

“We see that this is an unforeseen occurrence,” said Reverend Satrya, who like many Indonesians goes by only one name.

Earlier, the GBI congregation in Bandung issued a letter acknowledging that the pastor was taken to a local hospital suffering from respiratory problems. He died on March 21 and was buried immediately according to Covid-19 protocols.

According to the letter, another pastor died eight days earlier and was also buried immediately according to Covid-19 protocols.

Meanwhile, Reverend Gomar Gultom, who heads the Communion of Churches in Indonesia, said his group has called on congregations from various denominations to pay serious attention to the central government’s call to worship at home and practice social distancing.

“We have issued letters and video clips calling on our members to take social distancing policy seriously and to hold Sunday worship at home,” he told UCA News.