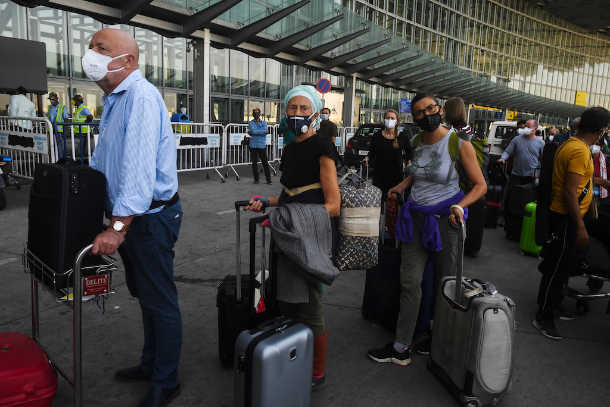 Foreign nationals wearing masks line up outside the departure terminal of the Netaji Subhash Chandra Bose International Airport to board a special evacuation flight during a government-imposed nationwide lockdown as a preventive measure against the coronavirus in Kolkata on March 31. (Photo: Dibyangshu Sarkar/AFP)

India has embarked on a mega plan to evacuate some 148,000 Indians, mostly migrant workers, stranded in 12 countries, matching a plea made by political and church leaders.

The government of Prime Minister Narendra Modi has scheduled 64 flights and several naval ships in the first phase of the operation from May 7-14, officials announced.

"We appreciate the government move. It respects the right of every citizen to come back to their country," said Father Antony Thallchellor, spokesperson of the synod of the Kerala-based Syro-Malabar Church.

As the coronavirus began to spread, causing the Covid-19 pandemic, most migrants wanted to escape from their cramped quarters and labor camps. However, a lockdown announced in India cut off transportation, keeping them stranded in their host nations.

Cardinal George Alencherry, head of the Eastern-rite Syro-Malabar Church, on April 23 wrote to Prime Minister Modi expressing his concerns for the plight of Indians abroad and the need to evacuate them.

India tops the world in exporting migrant labor, with at least 17.5 million Indians living outside the country, according to data from International Migrant Stock 2019.

Church people say roughly four million Indian Christians, mostly from the southern and western parts of the country, work in the medical profession as nurses and doctors and in jobs such as seafarers and software engineers.

Over 3.4 million Indian migrants are estimated to be living in the UAE, mostly from southern states like Kerala.

Although some 300,000 people have registered to come back to Kerala alone, the government clarified that only select people such as the aged, sick, pregnant and students would be prioritized.

"I want to reiterate that this is a limited operation, which does not signal resumption of domestic and international civil aviation services," said federal Civil Aviation Minister Hardeep Singh Puri.

He said the country's aviation industry would remain stalled until May 17 when the lockdown is expected to end.

The government relaxed lockdown norms in most parts of the country on May 3, some 40 days after it began on March 25.

Although cases are coming down in some areas of southern India, the pandemic is reportedly spreading in cities like Mumbai and Delhi. India had reported 49,400 positive cases and 1,695 deaths as of May 6.

The Indian government's efforts to bring back stranded Indians from these countries is being billed as "the biggest ever evacuation exercise" in decades, deploying a raft of civilian aircraft and naval ships.

Of the 300,000 registered for evacuation, some 40 percent are blue-collar workers and 20 percent are working professionals, said a report in Khaleej Times daily. At least 20 percent have lost their jobs, it said.

A federal official on condition on anonymity said the government does not plan to evacuate all those who have applied. All evacuees will be quarantined and will pay nominal charges for their travel, the official said.

"The return of a large number of jobless Indians will have serious repercussions for an already stressed job scenario in India," said sociologist Vidyarthi Kumar.

States such as Kerala had accommodated migrants from development-starved states in northern and eastern India. "Now they have to find jobs for their own," Kumar said.

Joblessness has increased with the movement of internal migrants back to their villages and the arrival of unemployed overseas migrants, Kumar said.

"All this will add to the financial strains of the states and the country," he said.