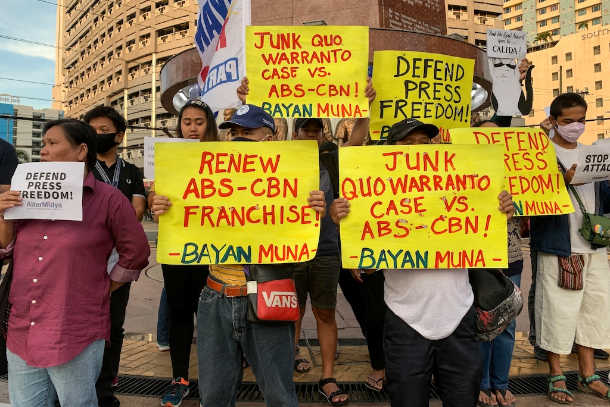 People attend a protest in support of broadcaster ABS-CBN in Manila on Feb. 10. The Philippines' biggest media group faces losing its operating franchise in what campaigners branded a fresh attack on press freedom. (Photo: AFP)

The Philippines' Episcopal Commission on Migrants and Itinerant People has expressed support for the country’s largest television network, which faces having its license revoked after falling foul of President Rodrigo Duterte.

The franchise for television network ABS-CBN Corp. expires on March 30. Its renewal remains pending in Congress, which is dominated by Duterte’s allies. The president has accused the media network of shady business practices such as charging viewing fees and flouting foreign ownership laws.

He has vowed to block the renewal of the network's license in a move observers say is an attempt to crack down on those critical of him, his administration and his controversial drug war. ABS-CBN has been operating for 65 years, running free television channels as well as AM and FM radio stations. In a statement, Bishop Ruperto Santos, vice-chairman of the episcopal commission, said the television network has given "joy and hope" to Filipino migrant workers for years. "[The television] is their hope and joy amidst the pain of separation from their families and hard work for their employers," said the bishop. He said the network's channel that caters to Filipinos abroad connects migrant workers with what is happening in the country, "and find themselves still united, identified with us here." Bishop Santos shared how Filipinos who are born in other countries speak Filipino because of ABS-CBN's broadcasts. Various media groups have condemned the government's move to block the renewal of the network's franchise, saying it is a threat to press freedom. "This is not just about ABS-CBN. This is not just about the Philippine media. This is about whether anyone can or should deprive you, the Filipino people, of your right to know," read a statement from the National Union of Journalists of the Philippines. The National Union of People’s Lawyers said the government move was reminiscent of martial law years during the 1970s under dictator Ferdinand Marcos. "During those years, the media was put under government control and the information flow was restricted," lawyer Ephraim Cortez said. "Independent journalists and media workers were similarly threatened and silenced with false charges."  The Foreign Correspondents Association of the Philippines called the bid to close ABS-CBN as political harassment that threatens "a pillar of the media industry that employs thousands of Filipinos." It is not the first time that the Duterte administration has targeted media companies critical of his administration. In 2018 and 2019, he tried to shut down news website Rappler after it reported about the government’s so-called war on terror and its role in spreading fake news in the country.