The Diocese of Sylhet in Bangladesh is battling attempts by a group of Muslims to grab land purchased by a church authority years ago.

The Muslims have claimed 2.45 acres of land in the Pargana area near Sylhet divisional city as their “ancestral land” despite a court order in favor of the church authority in 2017.

The land, adjacent to the Sylhet Bishop’s House, was legally purchased from 2013-15 to set up a school, a clinic and some church-oriented service facilities, diocesan officials said.

On Sept. 21, Oblate Father Soroj Costa, officer in charge of the diocese, filed a case against 19 Muslims for an alleged break-in attempt at the property at night and uprooting some 50 newly planted tree saplings. 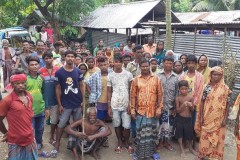 Again, on the night of Sept. 24, a group of armed men attempted another break-in, fleeing and leaving behind two machetes when security guards shouted at them.

“We are investigating the case and two arrested men are in jail. We have recovered the machetes and are trying to identify the motive,” officer Purkayesto told UCA News.

As part of beefing up security measures, police officers have been deployed on the property, he added.

Oblate Father Joseph Gomes, coordinator of the Justice, Peace and Integrity of Creation, alleged that the diocese has faced a series of attempts and intimidation from “land grabbers” trying take over church property.

“Since 2017, a group of land grabbers have set their eyes on church property. They filed a case demanding their fabricated claim on the land. The police report and court ruling came in the Church's favor. Again, they sought an injunction from the court on the land in 2019 but failed,” Father Gomes told UCA News.

From March this year, the group have made attempts to grab the property again, the priest alleged, adding that they demanded 2.5 million taka (US$29,465) for withdrawal of their claim on the property.

“On March 19, they installed a signboard claiming the property belonged to them. The next day, they erected four boundary pillars. Finally, they have uprooted trees planted by the Church and attempted to break into the property,” Father Gomes added.

Israk Ali, one of the accused in the case, declined to talk when contacted by UCA News.

Sylhet Diocese was erected in 2011 and was earlier part of Dhaka Archdiocese. The diocese covers four civil districts — Sylhet, Hobiganj, Moulvibazar and Sunamganj. The region is known as the tea plantation hub of Bangladesh.