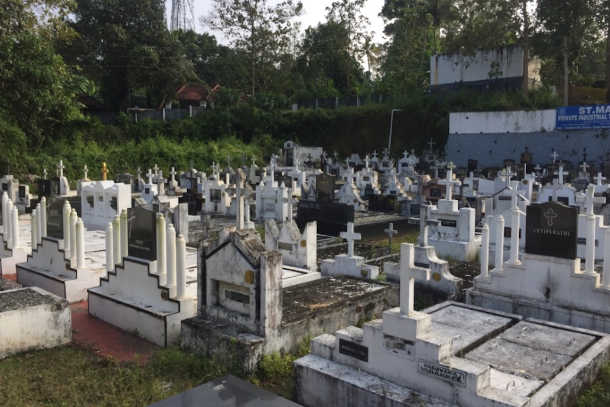 A Christian cemetery in southern India's Kerala state. Tamil Nadu state has enacted a law to punish those who disrupt the burials of Covid-19 victims. (Photo: UCA News)

Church officials have welcomed Tamil Nadu enacting a law to ensure the burial rights of people dying of Covid-19 despite increasingly violent protests in the southern Indian state.

The ordinance, which amended the Tamil Nadu Public Health Act of 1939, seeks to give three years in jail to anyone who disrupts the burial of Covid-19 victims, a state notification said on April 26.

"It is a welcome step at a difficult time like this. We believe in the dignified burial or cremation of any dead person irrespective of Covid-19," said Archbishop Antony Pappusamy of Madurai, who heads the regional bishops' forum.

The ordinance, the first such in India, comes after the state witnessed several incidents of people violently objecting to burials in their area for fear of contracting the disease as they believe such burials will pollute their area.

In the latest incident on April 19, people violently objected to the burial of neurosurgeon Simon Hercules in his Catholic parish cemetery in state capital Chennai despite permission from church authorities.

A mob pelted stones at the ambulance that carried his body and injured its driver and others in the vehicle. The doctor's burial in the parish cemetery was abandoned. The mob also objected to his burial in a public cemetery despite officials promising to ensure compliance with Covid-19 protocols. The body was later taken back to the hospital that the deceased owned. It was later buried in a government cemetery by his colleagues and friends under heavy police protection. In another incident in the state's Coimbatore district, villagers protested against the burial of a doctor who died of dengue. Villagers mistakenly believed he had died of Covid-19, reports said. "Each dead person has a right to get decent and dignified last rites, and that should not be denied at all," Archbishop Pappusamy said. He said Catholics were not involved in opposing the doctor's burial in his parish cemetery. Some others in the vicinity opposed it but church officials and parishioners were sad that the burial could not be conducted, he said.

"If a Catholic dies, of Covid-19 or not, he has a right to be buried in his parish cemetery and it cannot be denied at all," the archbishop asserted.

Besides Tamil Nadu, states such as Karnataka, Punjab and Meghalaya have witnessed violent protests against burying those who died of Covid-19.

Other states should enact laws to put an end to the disrespect of the deceased, the prelate said.

On April 23, the burial of a 75-year-old woman in a village in Karnataka was conducted under heavy police protection after people feared they might contract the coronavirus.

Similarly, the burial of a Christian doctor in Meghalaya was conducted on his family property after local people objected to his burial in a Protestant church cemetery. Similar incidents have been reported from the northern state of Punjab, where even family members have refused to attend burials for fear of the viral disease. In several places, health workers have been targeted when they went to collect swabs of people with Covid-19 symptoms. People fear contracting an infection from health workers. In some cases, villagers believe testing will end up with them being taken to isolation centers, reports said. As violence against health professionals surged, the federal government promulgated an ordinance on April 22 criminalizing such acts. The government amended the Epidemic Diseases Act 1897, stipulating jail terms of up to seven years and fines of up to 500,000 rupees (US$6,570) for those who use violence against health workers.