Policeman, soldier hurt 'in rebel attack' while guarding church for a Sunday service 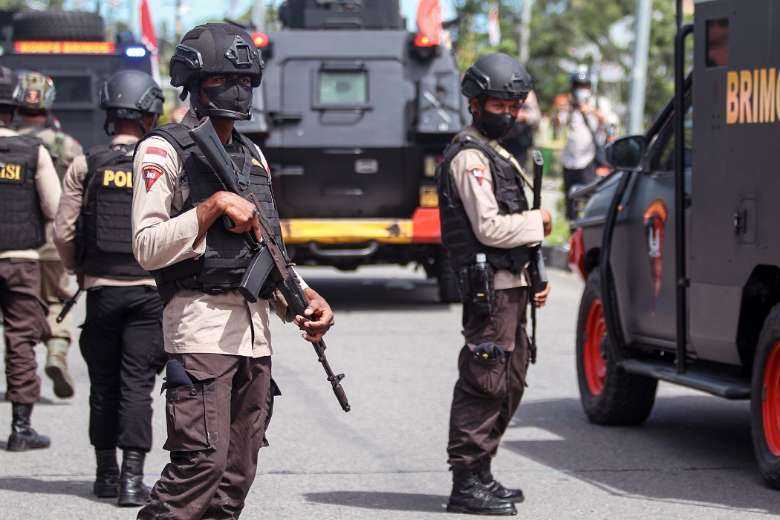 Indonesian police at a checkpoint in Papua province on April 1. (Photo: AFP)

Two members of the Indonesian security forces were shot and wounded by separatist rebels while guarding a church in Papua.

Papua police chief Mathius D Fakiri said the attack took place in Apmisibil, a village in Pegunungan Bintang district, at a Protestant church during Sunday morning worship on May 1.

A soldier and a policeman were wounded and taken to a hospital in the provincial capital, Fakiri said.

"The fact that this attack took place at a church gives cause for concern," the police chief said.

He said the policeman was shot in the back while the soldier suffered a leg wound.

Security forces have launched a hunt for the assailants, who are believed to be from the West Papua National Liberation Army and Free Papua Movement (TPNPB-OPM).

The church attack came a day after two other soldiers were wounded in an attack on a military post in Puncak district.

Theo Hesegem, executive director of the Papua Justice and Human Integrity Foundation, said the incident at the church was highly unusual as the TPNPB-OPM had never targeted security forces guarding places of worship before.

“It might be an idea for security forces to stay away from churches in future so as not to make them targets where innocent worshippers could be harmed,” he said.

He said there are no signs of a decrease in violence despite Indonesian military chief Andika Perkasa’s promise to adopt a more softly-softly approach in Papua.

Instead, the TPNPB-OPM are now attacking in villages and towns, not in rural areas.

He pointed to the recent killing of a marine who was shot in Nduga district on April 22 while on patrol. Several other members of the patrol were wounded.