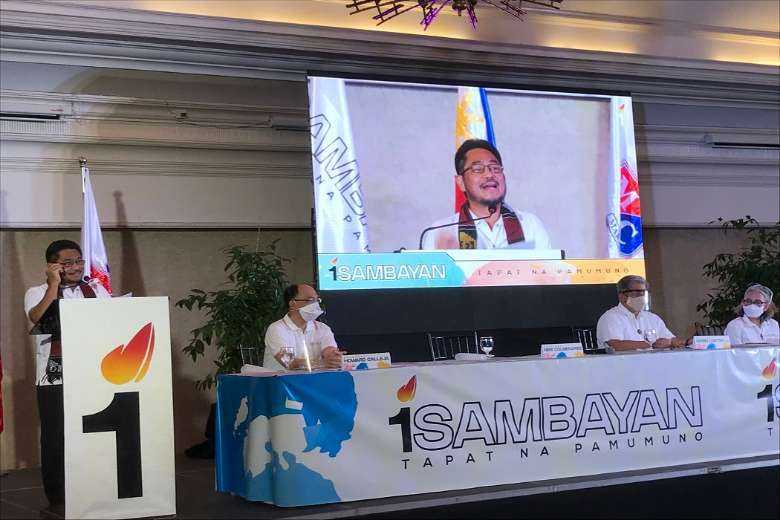 Jesuit Father Albert Alejo recites a poem about unity and national healing at the launch of the 1Sambayan coalition in Manila on March 18. (Photo supplied)

Two prominent churchmen in the Philippines are among the leaders of a new political coalition aiming to ensure allies of President Rodrigo Duterte do not come to power in the next national elections and to end controversial policies including the deadly war on drugs.

De La Salle Brother Armin Luistro and Jesuit Father Albert Alejo are convenors of 1Sambayan, a coalition of political and civil society figures that was launched in Manila on March 18 to find competent candidates for presidential and legislative elections in 2022.

The group claims to be on a mission to save the Filipino nation.

“It is a matter of national survival for us. We have to bring back our respect for human rights, integrity and honesty in government,” Carpio said.

Father Alejo said respect for human life was one of the major criteria the coalition would use in determining candidates it would endorse in the next elections.

“If you are quiet, if you don’t make a stand against brazen killings … you have no part in this because you are one of those who support the killings,” Father Alejo said in a video presentation at the launch.

One cannot remain silent when the poor and the marginalized suffer from authoritarian and human rights violations, he said, referring to the drug war that has seen thousands murdered.

He was also referring to a controversial anti-terror law that critics say allows draconian measures such as longer arbitrary detentions without legal recourse for loosely defined offences.

“If you are silent or applaud, especially if you applaud killings in the name of drugs, there is blood on your hands,” Father Alejo added.

Brother Luistro said one of his motivations to join the group was to ensure a better future for younger generations.