Catholics pray at the feast of Christ the King in New Delhi on Nov. 24, 2018. (Photo: Bijay Kumar Minj/UCA News)

The superintendent of police in Sukma district in the central Indian state of Chhattisgarh has asked police to monitor the activities of Christian missionaries and tribal converts.

In an official letter dated July 12, Sunil Sharma accused Christian missionaries of entering tribal areas and persuading non-Christian tribal people to be converted by enticement or allurement. He said conflicts had occurred between tribal people over conversions.

Christian leaders say the order is part of an anti-Christian wave continuing in the state.

“Police are supposed to be neutral and ensure every citizen's rights but here the police are behaving like a political party and seem blatantly against the Christian community,” Arun Pannalal, president of Chhattisgarh Christian Forum, said in a July 13 press statement.

“The order is premeditated, bigoted, far from neutral and against the constitution. A police official subverting the constitution is a very serious misdemeanor. Police already hold missionaries guilty that they are organizing religious activities, whereas the constitution guarantees freedom to organize anyone's religion."

“How many reports are in the recorded knowledge of the superintendent of police? Who are missionaries?" he asked.

Violence was reported in neighboring districts due to conversion-related activities, so I don’t want that to happen here

“If any information of any illegal conversion was received, officials should take action and prove it in court. The fact is that there is no such complaint; the converts have been practising Christianity for more than two decades.”

Meanwhile, Sharma in his directive to his subordinates urged them to keep a watch on activities of Christian missionaries and converted tribal people and report anything suspicious.

“The circular is a preventive measure rather than prohibitory. Violence was reported in neighboring districts due to conversion-related activities, so I don’t want that to happen here,” he said. 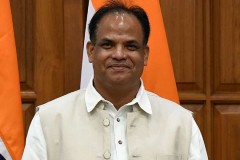 “Our officers are asked to collect the information through their network on religious conversion by enticement,” he said, adding that all are free to follow their faith.

The Chhattisgarh Freedom of Religion (Amendment) Act, 2006, stipulates that those who want to convert must seek permission from the local district magistrate at least 30 days before the ceremony. The magistrate will have the power to allow conversion only if threats or allurements are not involved. Anybody found guilty is liable to imprisonment for up to three years and a fine of up to 20,000 rupees (US$270).

Many critics say that after the Bharatiya Janata Party (BJP) came to power in New Delhi in 2014, attacks on minorities have seen a significant increase.

The BJP ran the government in the state for five years until 2018, when the Congress party unseated it. But the BJP and its affiliated groups are active in the state campaigning against Christians.