Clerics of four major religions and leaders of human rights groups discuss how to fully abolish the death penalty in Korea at a June 22 discussion session held at the National Assembly. (Photo by The Catholic Times of Korea)

With a new government in power in Korea, the Catholic Church is now pushing for the complete abolition of the death penalty in the country.

The Subcommittee for the Abolition of Capital Punishment, under the Korean bishops' Committee for Justice and Peace, jointly held a discussion session with lawmaker Fidelis Lee Sang-min of the ruling Minjoo Party at the National Assembly.

"We should try hard to stop capital punishment. What we are talking about is people killing other people," said Bishop Lazzaro You Heung-sik of Daejeon, president of the justice and peace committee.

"I wish the National Assembly would completely abolish it in order not to kill creatures of God," said the bishop.

During the discussion session, participating clerics decided to collect signatures in a bid to push the parliament to present a bill abolishing capital punishment.

In addition, it was agreed that a special event celebrating the 20th anniversary of the suspension of the death penalty in Korea would be held on Oct. 10, the World Day Against the Death Penalty.

There are 61 people currently on death row in the country. The last person executed by the state was in 1997. 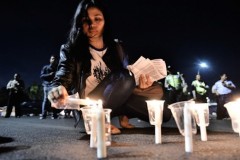