A girl stands on a boat next to a damaged house and rubble after the passage of Hurricane Iota in Providencia, Colombia, on Nov. 18. (Photo: AFP)

Laidy Betancourt now sleeps in a tent with her husband and 10-year-old son on the sanctuary floor of Our Lady of Sorrows Church (NuestraSeñora de los Dolores) on the tiny Caribbean Isle de Providencia.

She and many of the island's 5,000-plus residents were left homeless after powerful Hurricane Iota slammed Colombia's only island province early Nov. 16.

"We're thinking this will be the first and last time we experience this," Betancourt said. "We'll be moving back to the Colombian mainland."

Iota marked the first recorded Category 5 storm ever to hit the island, which sits off the coast of Nicaragua. The Colombian government estimates that the hurricane damaged 100 percent of structures, destroying eight of 10 of them.

Iota later hit Nicaragua as a Category 4 storm, then barreled through Honduras, both already reeling from Hurricane Eta, which passed through two weeks earlier. Authorities in Central America have confirmed more than 140 deaths from Eta and more than 40 from Iota, including one person on Providencia.

"The hurricane started at 8 in the evening, and at 3 in the morning the eye arrived," said Father Benito Huffington, the parish priest who has ministered on the island for 31 years. "Then at 10 in the morning the next day, it was as if another hurricane arrived, and that was what finished everything off."

As warnings started arriving from the central government while the storm neared, Father Huffington worked with the local mayor's office to offer shelter to residents. Nearly three dozen people took shelter in the church's youth center and dozens more in the concrete parish offices. For 10 hours, Father Huffington hunkered down in the bathroom of his home with three nuns who oversee a local school.

"We saved our life because we had a bathroom with a sturdy roof and concrete," he said.

But the roof of the youth center did not hold up as well and collapsed during the storm. Dodging the beams, the 33 people inside, including Betancourt, waited for a respite from the wind to run to the parish offices a few yards away.

"That was a very hard day, that breeze started to come in, and boof, boof, boof, the roof was lifted up," Virginia Webster, who was born and has lived on the island her entire life, said in a mix of English and her native Creole. 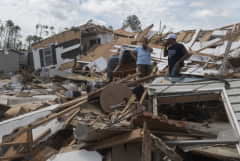 When the winds subsided about 1 p.m., relieved residents emerged to an island largely razed by the 160-mile-per-hour winds. Fishing boats sat in the middle of streets that were lined by piles of rubble.

Of the island's six Catholic churches, only one has not been damaged beyond repair. A pile of blue and white boards replaced the three-story Mary Immaculate Education Institute where the nuns educate 250 local children. Built in 1932, the building had been declared a national monument.

Our Lady of Sorrows Church lost its roof, its pews strewn around inside.

Providing some hope amid the despair, a concrete statue of the Mary on Santa Catalina island directly north of Providencia remained standing unscathed.

After seeing the statue during a tour of the island a day after the storm, Colombian President Ivan Duque noted that "after a Category 5, the Virgin still stood there. Many people are saying she is miraculous because many lives were spared."

Government flights and ships eventually arrived at the island, delivering vital emergency supplies. Duque has promised 15 tons in humanitarian aid and the government has delivered 1,500 tents. However, it has declined to evacuate all residents.

"Here people are in need of spiritual assistance, because in a tragedy of this magnitude, people need hope, encouragement, and presence," he said. "And our presence here is important and the fundamental help we can give."

Bishop Sanabria has remained on the island and on Nov. 22 celebrated the first Mass for dozens of residents at the parish office.

Colombia's government has promised to start delivering temporary housing and has set up a field hospital after the hurricane left the health clinic in disrepair.

At the church sanctuary where residents continue to camp in tents, Father Huffington has pleaded for tarps to cover the roof. Many islanders have complained that they are struggling to stay dry because of constant rain and lack of adequate shelter.

The Colombian government has promised to rebuild all structures by 2022. The islanders remain mostly unable to contact family and friends in the outside world.

Hurricane Beta in 2005 was the last storm to cause significant damage to the island. It damaged more than 1,500 homes.

"Now it's not just that homes don't have roofs," Father Huffington said. "Homes are no longer standing and we know that as an island, it will take longer for us to fix this."