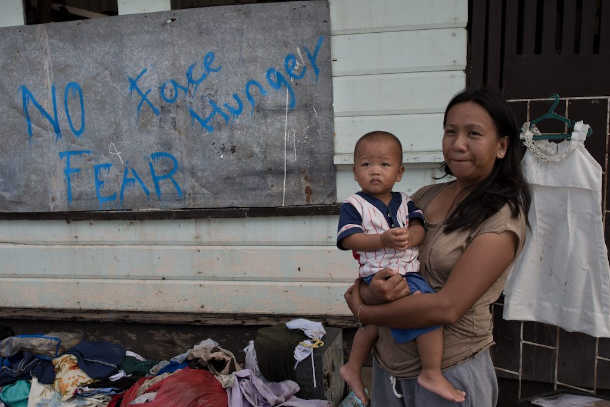 A woman holds a baby in front of a home with a 'no fear face hunger' message written on the wall in Tanauan near Tacloban in the Philippines on Nov. 16, 2013. (Photo: AFP)

“Now is the time for us to lead the way forward to ensure that these communities have the support they need to make it through this crisis and beyond,” said Sean Callahan, CRS president and CEO. “If we don’t provide adequate food to children now, it will impact them for the rest of their lives,” Callahan was quoted in a report by Catholic News Agency.

The United Nations and other international agencies have predicted that the Covid-19 pandemic will push an additional 130 million people to the brink of starvation. In his homilies on the pandemic earlier this month, Pope Francis highlighted global food insecurity. He said that more than 3.7 million people have died from hunger so far this year. A CRS campaign named “Lead the Way on Hunger” exhorts Catholics to donate as a sign of solidarity and to help spread awareness on social media. The agency has started a drive with the hashtag #LeadNow. “We need to let people know we have the framework for responding,” Callahan said. Archbishop Bernard Hebda of St. Paul and Minneapolis and a board member of CRS said that the CRS campaign is an important expression to uphold human dignity.” “We believe that each life, no matter how vulnerable, is precious,” he said. CRS started its campaign on May 16 during the week-long observation of the fifth anniversary of Pope Francis’ encyclical Laudato Si’. The agency is working in several Asian and African nations. In Guatemala, CRS is offering children “their only meal of the day,” served through programs at schools. However, schools are now closed due to the pandemic. In the Philippines, CRS serves food and hygiene items to people with disabilities. CRS coordinates a food program that provides meals to 50,000 school-age children and 1,500 teachers in Sierra Leone, said Daniel Mumumi, who is in charge of CRS in the West African nation. According to the World Health Organization (WHO), the number of hungry people worldwide is growing. In a 2018 report, "State of Food Security and Nutrition in the World," the WHO said that hungry people reached 821 million in 2017 or one in every nine people. Unemployment, lockdowns, high food prices and disruptions to supply chains, which were caused by the Covid-19 pandemic, have made it difficult for impoverished families to secure food. “The shadow pandemic of worsening hunger is playing out in some of the world’s most vulnerable countries,” said Callahan. According to the WHO report, Asia has 515 million hungry people, followed by Africa (256.5 million) and Latin America and the Caribbean (39 million).