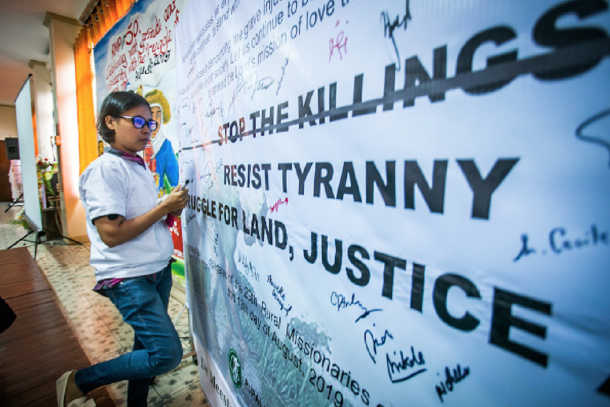 Zara Alvarez, a church worker from Negros province in the central Philippines, signs a manifesto signifying her commitment to work for human rights on Aug. 22, 2019. Alvarez was shot dead in Bacolod City on Aug. 17. (Photo: Mark Saludes)

A human rights activist and church social worker was shot dead in the Philippines on Aug. 17 in what colleagues say was most probably an extrajudicial killing carried out by state agents.

Zara Alvarez, a volunteer for the Church-Workers Solidarity group in San Carlos Diocese, was gunned down in Bacolod City in the country’s Western Visayas region.

The activist had reportedly been receiving death threats for more than a year.

Her death came a week after the murder of well-known labor and agrarian reform activist Randall "Randy" Echanis, who was shot dead in his Manila home on Aug. 10.

Alvarez was affiliated with leftist groups Anakpawis — of which Echanis was chairman — and rights group Karapatan, which he co-founded. She once served as Karapatan’s education director and a paralegal staff member.

In August 2019, Alvarez told UCA News that church work brought her to the peripheries where “farmers who fight a daily struggle live in a place that can only be described as hell on earth.”

She also said more than 87 farmers and activists in her province whom she knew had been murdered. "Every time my phone rang, I knew someone had died," she had said.

Alvarez also said that despite the threats, she had to respond to her call “because the pursuit of justice has to continue.”

“Receiving death threats has already become one small part of our work,” she said.

Karapatan said Alvarez’s death was part of a “pattern of killings” that included the recent murder of Randall Echanis.

“Like Ka Randy, she was among those tagged as ‘terrorists’ in a proscription case of the Department of Justice filed in 2018. Her name and those of many others were stricken off the list, but the threats against her by alleged state forces continued,” Karapatan said on social media.

“We extend our condolences to Zara’s family and friends, as we and many other colleagues mourn the killing of a beloved human rights and health worker. We will never relent in pursuing justice for Zara, Ka Randy and all victims of extrajudicial killings.”

Bishop Gerardo Alminaza of San Carlos called the  killings “a clear mark of the shameless immorality of the Philippines.”

He urged churchgoers to campaign for an end to extrajudicial killings where the perpetrators go unpunished.

Last year Bishop Alminaza told UCA News that attacks on church workers like Alvarez were not new and were even to be expected.

“Anyone who chooses to be prophetic and follow Christ’s works should be aware and prepare for the consequences,” Bishop Alminaza said at the time.