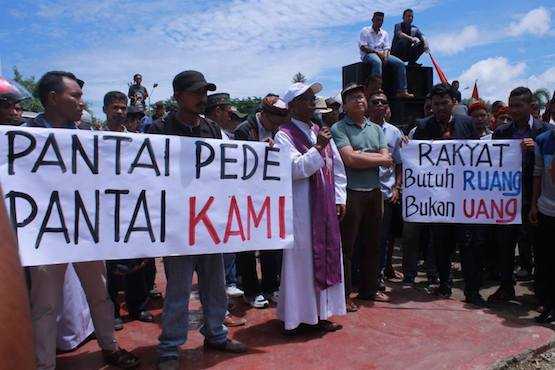 Father Robertus Pelita (holding mic) along with activists and students stage a protest in Labuan Bajo against tourism development. (Photo by Ferdinand Ambo)

Catholics and church leaders in Ruteng Diocese in East Nusa Tenggara have accused the government of excluding local people in its push to develop tourism in an area world famous for its natural beauty.

Hundreds of Catholics, priests and students took to the streets of Labuan Bajo, on the westernmost tip of Flores Island, and also in Jakarta recently, to demand a halt to the construction of hotels at Pede Beach, the only public area left for local people.

Labuan Bajo has become a popular tourist and business destination after Komodo Island was declared one of the seven new wonders of nature.

The government recently issued permit to build hotel on a 4.2-hectare site by Pede Beach, and construction started last week, despite local resistance.

"Pede Beach is the only coastal area still open to local people. All the other areas have been privatized for hotels and resorts," said Father Robertus Pelita, head of the Labuan Bajo deanery.

"The government must protect its citizens, not marginalize them," he said.

During the Labuan Bajo protest, Father Pelita read out a letter from Bishop Hubertus Leteng of Ruteng calling on the government and local people to "avoid conflict" and "hold a dialogue with all parties to come up with a solution that benefits society as a whole."

In Jakarta, Catholics from Ruteng Diocese called on Home Affairs Minister Tjahjo Kumolo to order local officials in Labuan Bajo to talk to the people and not make arbitrary decisions.

The government has spent about $225 million developing tourism in and around Labuan Bajo, which includes the Komodo National Park, but local people have seen little of it.

Many people in the area still live in acute poverty. Infrastructure is lacking as is health care facilities and clean water.