Chronic poverty is fueling child labor in the Philippines 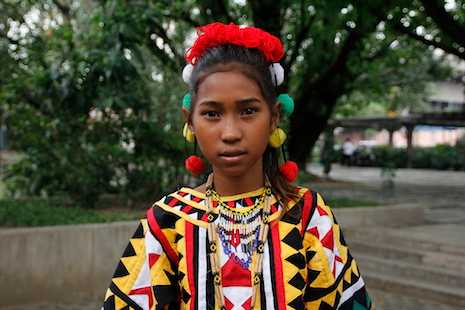 Geraldine Aboy, a 14-year-old child laborer from the Manobo Pulangiyen tribe, works on a sugarcane plantation in Mindanao (Photo by Joe Torres)

Geraldine Aboy, 14, lives in a makeshift hut of grass and plastic sheeting in the middle of a sugarcane plantation. She wakes at four o'clock in the morning to cook whatever available food there is and prepare for the trek to nearby fields.

She is not alone. At the break of dawn, about 100 children her age — some even younger — start to cut the cane, clean it, and carry it in bundles to waiting trucks for processing at a mill. The children work until late in the evening when the fields are burned and earn a mere US$2.70 a day.

"We cut ourselves. Some of my friends were bitten by snakes. It is hard work," said Geraldine, who belongs to the Manobo Pulangiyen tribe in the village of San Nicolas in the southern Philippine province of Bukidnon. The children are only able to go home to their villages after all the cane has been harvested.

"We live in camps. Our houses are far into the mountains. We have to cross rivers. When it rains, the river overflows and we have to wait until the water subsides," Geraldine said.

In the camp and in the field, the children survive only on rice and salt. "We don't have fish or anything because if we ask for it they will deduct it from our pay," she said.

Geraldine is the second of seven children, two of whom died in infancy. "My father is sick and my elder brother has polio. My mother takes care of my younger siblings and earns from odd jobs in the village," she said.

Another child worker, 17-year old Tam-tam, has also been working as a seasonal worker in the plantation since he was 11 years old. As the eldest among seven children, he took the responsibility of helping his parents provide for the needs of his siblings.

He stopped attending school at the age of 10. His parents, both seasonal plantation workers, only earn between $15 to $20 a week and could not provide for their children's education.

Tam-tam's nails have been deformed because of the heavy work. He is thin and has been complaining of chest pains but could not afford to go to a doctor or complain to the plantation supervisor.

"I might lose my job if I complain," he said.

"Poverty and lack of family income are the main reasons why children leave school and work," said Anna Leah Colina, executive director of the non-government Ecumenical Institute for Labor Education and Research (EILER).

With funding from the European Union, EILER conducted a six-month study on child labor in mines and plantations in the southern Philippines from April to October 2014. Results of the study were released on Wednesday in Manila.

Colina said that two out of 10 households surveyed in six communities have incidents of child labor — primarily due to low family income, lack of access to land and inaccessible schools.

The study, which involved 3,859 households, found that children from poor families "are being forced by necessity to augment the family's coffers by working". Leaving school and working is a decision forced upon children by the reality they face each day, the study added.

It further revealed that 96 percent of the households surveyed are living below the poverty threshold of their regions. At least 78 percent of respondents said they do not own or have access to land. Instead, most rely on other means to earn a living such as working in mines and plantations.

Colina said a lack of access to education is also a "one push factor" to child labor. She said 60 percent of child laborers did not reach the sixth grade, while 44 percent reached Grade 6 before they left school to work.

"When children are out of school, they are more at risk of working in plantations and mines," she said.

The study also revealed the worsening working conditions being faced by child laborers, such as 16-hour shifts, the use of illegal drugs to keep them awake while working inside mine tunnels and low wages.

The case of Julius (not his real name) is an example of the difficult situation child workers face. The 15-year-old boy is one of many children in the village of Diwata in Compostela Valley province who work alongside adults in the tunnels of a gold mine.

From early morning until sundown, Julius is inside the tunnel with a sledgehammer, a shovel and a pickaxe with only a plastic helmet, a pair of boots and gloves for protection.

The boy had to work to survive after running away from home at the age of eight. "We were very, very poor, and at times we did not have anything to eat," he said.

With money in his hand, Julius has access to alcohol, gambling and even drugs. But, he said, he wants to go to school and be a teacher.

However, Colina said child labor in plantations and mines "provide no means by which the children and their families may escape the vicious cycle of generational poverty". She said child laborers work the same kind of low-income, labor-intensive jobs and generate just enough income to eat and work the next day.

Loretta Ann Rosales, chairman of the Commission on Human Rights, admitted that the Philippine government has "many failures" when it comes to protecting the rights of children and even families.

Rosales, however, pointed out that President Benigno Aquino’s government had inherited "a lot of problems that cut across administrations".

"It is very difficult to totally eliminate [child labor] because the families themselves tolerate or even encourage it," she said, adding that the most viable option for the government is to “target a reduction" of the number and incidents of child labor.

Colina, however, said the government is not looking into the root causes of child labor when it blames parents for causing or allowing children to work, or blaming parents as the perpetrators of child labor. She said the study showed that the "main push factor" of child labor is "poverty and the economic standing of the family".

"If there is no decent job for parents, children naturally help parents to earn for the survival of the family," she said.

Colina said the weakness of existing laws on child labor is it's being "very punitive".

"The parents are punished when in fact it is the responsibility of the state that basic children's rights are upheld and protected," she said.

"We should address the root causes of child labor by creating jobs, decent work, address the issue of landlessness, access to land, children’s education, among others," Colina said

Ambassador Guy Ledoux of the European Union noted that child labor in the Philippines "is clearly a consequence of pervasive poverty and the consequence of the absence of social safety nets and effective social protection".

In an address he delivered during the launch of the report on Wednesday, Ledoux said that the phenomenon "is exacerbated by the current lack of livelihood diversification most households face without adequate access to land or capital".

He said that there is "certainly a lot of work and challenges ahead as there are still 5.5 million Filipino children engaged in child labor, with three million of them trapped in the worst forms of labor".

According to a 2011 study by the International Labor Organization, there were an estimated 5.5 million Filipino children aged five to 17 who were engaged in jobs at the time.

Those identified working in hazardous environments numbered about three million, comprising 54.5 percent of the total number of working children.

"I want to stop working. I want to go back to school," said 14-year-old Geraldine.

"My wish is to finish my studies to achieve my dream. I want to be a singer. I also want to be a teacher to be able to teach the children in our tribe to read and count," she said.