September start due to businessmen who want to exploit Filipino culture, bishop says 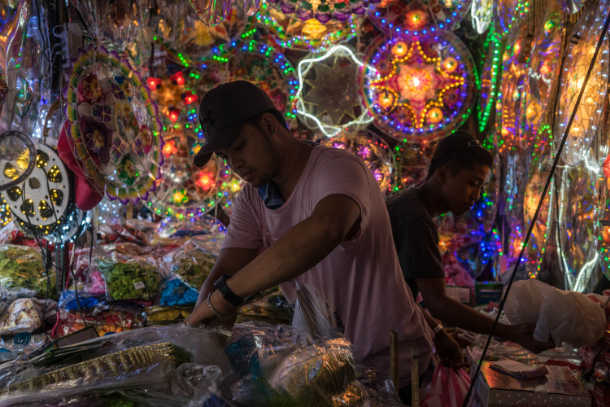 It was only the first week of October but Jenny Garcia, a 28-year old marketing executive, was already busy putting up her Christmas lights.

Jenny was worried she was already a month late in observing the Christmas season.

"My family in the province starts putting up decorations on Sept. 1," she said.

In her window, she placed Christmas lights below a star-shaped lantern. Inside, Jenny decorated a Christmas tree with a traditional Nativity scene under it.

"It really feels like Christmas already. I remember my childhood every time I decorate for the season. It is fun and exciting," Jenny told ucanews.com.

The Philippines supposedly has the longest Christmas season that starts on the first day of September and ends with the "Feast of the Three Kings" in January.

Christmas songs are played on the radio and city streets around the country are decorated with lights.

When September comes, Ramon Vasquez, a 32-year-old graphic artist, starts saving at least a dollar a day for Christmas gifts.

"Every Christmas Eve, I make sure there is a gift for everyone in the family," said Ramon. "And I have a lot of nieces and nephews," he added.

The business of Christmas

Bishop Arturo Bastes of Sorsogon said the church has "no answer" as to why Filipinos have the longest Christmas celebration.

"It is totally absurd as far as the Liturgy is concerned," said the prelate, adding that the Advent season, or the preparation for the commemoration of the birth of Jesus, only starts four Sundays before Christmas Day.

The prelate said the "strange phenomenon" can only be attributed to businessmen "who want to exploit the culture of Filipinos who suddenly become generous during Christmas."

Jayeel Serrano Cornelio, a professor at the Jesuit Ateneo de Manila University, said the early onset of Christmas in the Philippines has "something to do with the culture of consumerism.

Cornelio, a sociologist of religion, said the idea of starting the celebration early, is connected to people's "consumption habits."

"Longer preparation and celebration mean a longer time for people to shop, prepare gifts, and buy things," he said.

"There is a pattern of consumerism" in feasts and religious activities that are celebrated for a week or longer in the Philippines, according to the professor.

Although "consumerism ... is not necessarily evil or very anti-religion," Cornelio said "religion has been hijacked by consumerism."

He said, however, that consumerism can also be linked to "certain values like the love of family and the spirit of giving and sharing."

Weeks, or even months before Christmas, Filipinos and institutions distribute gifts to orphanages, feed the poor, and visit and give gifts to the sick.

Bishop Bastes, however, said the early observance of Christmas "reveals a lack of liturgical and catechetical formation" among many Filipinos.

He said the "commercialization of Christmas ... bars people from the true understanding and appreciation of Jesus Christ."

The prelate said sharing God's gift of Love does not necessarily mean "falling into the culture of consumerism and materialism."

Not all Filipinos, however, are like Jenny and Ramon who have the resources to prepare for the annual celebrations early.

Guillermo Aguilar, a 51-year-old taxi driver, said that instead of decorations or gifts, he would spend his money on food on Christmas Day.

"I want a decent meal for my family on that special day," he told ucanews.com.

Data from independent think tank Ibon Foundation show that there are at least 6.5 million Filipino families that are struggling on only US$185 monthly.

Aguilar complained that his monthly US$280 salary is not enough to support his family.

The country's inflation rate jumped to 6.7 percent in September from 6.4 percent in August.

Aguilar, however, said high prices will not spoil his family's Christmas celebration.

"The important thing is that my family is safe and complete to celebrate [Christmas] with simple food on the table.

Bishop Bastes said the country's economic situation should not determine whether or how Filipinos celebrate Christmas.

"The true spirit of Christmas is the sharing of talents, time, and treasure with others," said the prelate.