People who survived the second wave of the pandemic won't be able to withstand a lethal third wave, Christians say 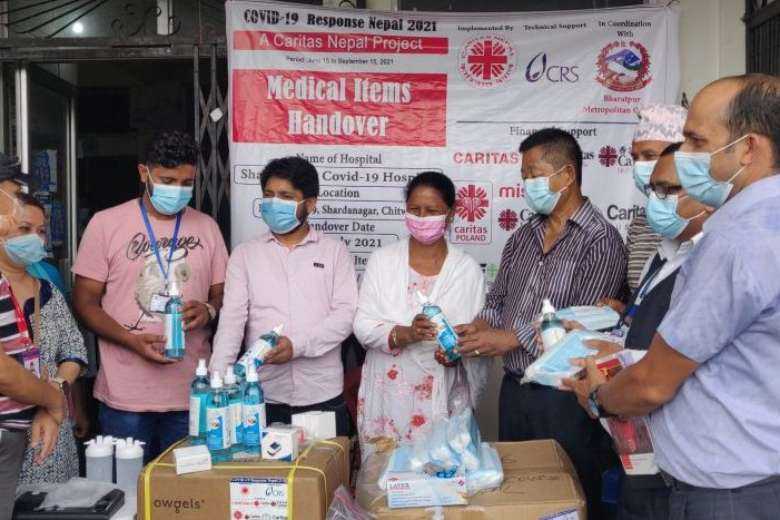 The ongoing third wave of Covid-19 could be more damaging for Nepal's vulnerable communities including minority Christians already reeling from the fallout of a deadly second wave, Christian leaders and aid workers say.

“The third wave has already started in Nepal and we are afraid how far it will go this time,” Chirendra Satyal, a Catholic and director of media and communication in the Apostolic Vicariate of Nepal, told UCA News.

During the second wave, many people in remote areas were infected and died but remained uncounted — and these rural communities are most vulnerable as their areas lack health facilities, said Satyal, 63, a Catholic father of three based in capital Kathmandu.

Nepal’s Ministry of Health and Population has instructed hospitals to prepare measures to tackle the third wave as cases of the coronavirus continued to surge in the past week.

Total infections stood at 761,124 and deaths at 10,730, the Kathmandu Post newspaper reported on Aug. 30. Some 1,902 new cases were reported in the previous 24 hours, ministry officials said.

There are hardly any health facilities in rural areas, so if you fall sick you are on your own, to quarantine or survive

“These statistics are questionable. How were these deaths and infections measured? In many villages people don’t even go for testing even if they feel sick,” he said.

“There are hardly any health facilities in rural areas, so if you fall sick you are on your own, to quarantine or survive. There are no oxygen concentrators, no ventilators, and these are already too expensive for many people. They can get oxygen if they walk a few days and reach a hospital. They are simply at the mercy of God if they fall sick.”

Data from the Johns Hopkins University shows the Himalayan nation registered between 3,000 and 4,000 daily cases in the days leading up to Aug. 25. The cases were less than half the numbers recorded in July and early August.

"Daily cases have increased, hospital beds are being filled up with serious patients, and many cities and towns have declared lockdown measures," Baburam Marasini, a former director of epidemiology and disease control, told German international broadcaster Deutsche Welle.

The second wave of the pandemic hit Nepal in mid-April and wreaked havoc. Amid rising infections, a supposed spillover from neighboring India, hospitals have struggled to get beds and oxygen, leaving many sick people to die without receiving treatment. At a daily rate of 6.51 deaths per million, Nepal had the worst death scenario in South Asia by the end of May, health experts said.

Amid political upheaval, the Nepali government has faced criticism for a slow vaccination program. Nepal has fully vaccinated 4.05 million citizens, about 14.2 percent of an estimated 28 million people in the country, according Our World in Data.

On Aug. 30, Father Richard Rai, parish priest of Assumption Cathedral Church in Kathmandu, issued a notice that Sister Deepa Lepcha from the Sisters of St. Joseph of Cluny had died from Covid-19.

The ethnic Nepalese nun was infected while working in a mission station in Hetauda town, about 100 kilometers south of Kathmandu, a few weeks ago. She was flown to the capital by a helicopter for better treatment but died after weeks on a ventilator.

Satyal said the Assumption Church, which has about 2,500 Catholics, had witnessed the deaths of seven members prior to the death of the nun, adding that his relatives have also been infected but all recovered.

The Catholic Church has mostly adopted preventive measures for more than one year since the pandemic started and public Masses remain suspended, while Sunday and daily Masses are streamed online from the residence of Bishop Paul Simick, he said.

While there are an estimated 8,000 Catholics in Nepal, the country has between 3-5 million Protestant and Evangelical Christians, according to the World Database of Christians.

Protestant churches were badly hit by Covid-19, which has claimed the lives of more 130 pastors and infected 500 pastors and their family members, said B.P. Khanal, a Protestant pastor and theologian.

Robert Karthak, 95, former pastor of Gyaneshwar Church, one of the largest Protestant churches in Nepal and a pioneer of Christianity in the Hindu-majority country, died from Covid-19 on May 18.

The National Church Fellowship of Nepal, a leading ecumenical forum, noted that except for some big churches most churches have failed to replace pastors and are having hard times due to a loss of income after long closures during the pandemic.

They are surviving somehow, but if the third wave hits them, it will be very hard for any of them to survive

“There are no tourists in the main tourist spots in Kathmandu. The hotels have gone bankrupt. Everything is just empty. It is very sad to see people who were drivers of tourist vehicles and tourist guides. All have gone bankrupt and many have returned to their villages and now work as agricultural workers and growing rice and corn,” Satyal said.

“They are surviving somehow, but if the third wave hits them, it will be very hard for any of them to survive.”

“With fear and insecurity, we have seen communities infected as numerous rumors and misinformation spread like wildfire, with many resorting to bizarre and incorrect methods of dealing with the virus,” Lamsal, 31, told UCA News.

Despite limited resources, Caritas Nepal has been helping people to ensure their right to health and information through various channels as well as awareness-raising activities, he said.

“By reaching the most disadvantaged and vulnerable with medical and food relief packages, we are aiming to build resilient communities,” he added.

Since last year, Caritas Nepal has assisted communities in 23 districts with funding from partners and donors. It established 150 hand-washing stations in rural and urban municipalities, while it distributed 10,000 Covid-19 safety kits to individuals, health workers, health posts, quarantine centers and humanitarian workers.

It also provided over 7,252 households with food aid and some 24,540 smallholder farming households with agricultural input while reaching out to over 100,000 people through its Covid-19 awareness campaign.