Illiteracy, poverty and lack of electricity are among challenges in fighting Covid-19 among tribal people People line up for vaccination against the Covid-19 pandemic on May 1 in India's Assam state. (Photo: AFP)

Catholic dioceses in India’s northeastern states have joined other Christian groups to contain the spread of Covid-19 among vulnerable indigenous people, especially those working in tea gardens.

Leaders of Christian volunteers said their prime concern is to stop the virus from spreading among more than one million people working in some 800 tea gardens in Assam state.

Bishop Albert Hemrom of Dibrugarh Diocese, which covers some tea garden areas, said in the initial stage of the second wave cases were restricted to major cities in Assam.

Besides creating awareness of ways to check the infection, Christian volunteers are busy distributing food to poverty-stricken daily wage earners on tea estates who have been made jobless following lockdowns in northeastern states, he said.

India’s eight northeastern states are cut off from the mainland but for a 20-kilometer-wide corridor called the Siliguri Corridor, and four of them — Arunachal Pradesh Meghalaya, Mizoram, Nagaland — are Christian-dominated.

The region, which includes Assam, Manipur, Tripura and Sikkim, was largely free of Covid-19 cases in the first wave that started in January 2020, but the second wave that began in April changed the situation.

Assam, the most populous state in the region with some 30 million people, continues to report more cases. It reported more than 4,000 new cases daily in the first week of June with some 40 people dying daily.

“We never had a problem in the first wave but now hundreds of fresh cases are reported daily from our villages and tea gardens. It is a matter of serious worry for us,” Bishop Hemrom told UCA News on June 4.

He said the infection can spread faster as most tea garden workers live in clusters and small rooms. “If one person is infected, it will lead to infection of the entire cluster and in such a situation it would be disastrous,” the bishop said. 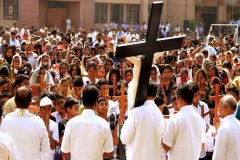 Father Caesar Henry, a parish priest heading the relief and awareness operation in Golaghat district in Dibrugarh Diocese, said awareness creation is an important part of their work.

“The indigenous population in the tea gardens are largely unaware of Covid-19 protocols. They can hardly follow any serious social distancing, sanitization and other measures,” he said.

With the help of Christian volunteers, the priest has launched special awareness campaigns among indigenous people to inform them of the importance of social distancing, wearing masks, washing hands, sanitizing their homes and the need for vaccination.

They are also afraid to go for vaccination because they believe it might lead to death or other health issues, the priest said.

“Now we are urging them to follow Covid-19 protocols and encouraging them to get vaccinated,” Father Henry told UCA News on June 4.

He said of the 4,000 Catholics in his parish only four people had been vaccinated as of June 4. The four were government employees, he said.

Father G.P. Amalraj, deputy secretary of the North Eastern Regional Bishops' Council, said problems are similar in the entire region, which is dominated by tribal people.

The priest said they are mobilizing funds from within the region and other resources to support the poor in 15 Catholic dioceses.

The regional Church has also launched a toll-free number for online counseling to people living under stress.

Allen Brooks, spokesman of the Assam Christian Forum, said the situation is "very bad” in the region.

The largely illiterate indigenous people are unable to follow Covid-19 protocols as the literature related to them is not in their indigenous language.

“Even the young people willing to be vaccinated are unable to register their names online for vaccination because of the frequent power outages and poor internet connections," Brooks said.

“We can only work with government agencies to help save their lives with our limited resources, and we are doing it the best way possible.”