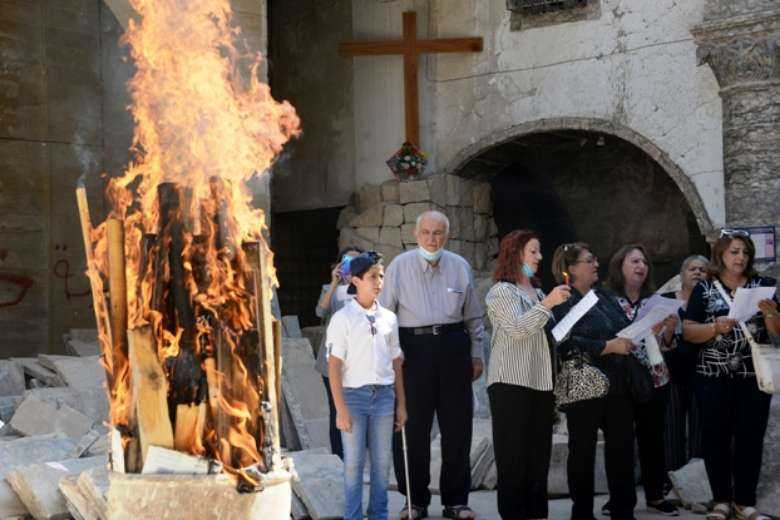 Iraqi Christians chant during the inauguration ceremony for the new bell at the Syriac Christian church of Mar Tuma in the country's second city of Mosul in Nineveh province on Sept. 18. (Photo: AFP)

The minority Christians in Iraq want to be part of the social mainstream but its political system continues to yield to the sectarian calls of majority Muslims, challenging both the democratic process and social integration.

Cardinal Louis Raphael Sako, the patriarch of the Chaldean Catholic Church, has been a stern opponent of the sectarian mentality. He criticized the US-introduced "quota system" in Iraq as the war-torn nation completed recounting of contested ballot boxes of the October polls on Nov 30.

According to Cardinal Sako, the main obstacle to the democratic process is the sectarian mentality, which is reflected in the quota system under which electoral seats are divided on an ethno-religious basis in parliament as also positions in public institutions.

The sectarianism feeds "corruption, poverty, unemployment and illiteracy," Cardinal Sako said in a message to the Iraqi communist party, which held its national conclave recently.

Though the sectarian quota system or muhasasa was introduced by the US after it occupied the Middle Eastern nation in 2003, its foundations were laid out by Iraqi opposition at the beginning of the 1990s.

With a view to toppling long-time leader Saddam Hussein, the opposition envisioned a system of proportional representation for Iraq’s Sunni, Shia, the Kurdish and other ethno-sectarian groups, including Christians.

The Christian minority has been reduced to less than 500,000, according to data from the patriarchate

Under the muhasasa system, the country has a Kurdish president, a Shia prime minister and a Sunni speaker of parliament to represent the country's three main social groups

Only nine of the 329 seats in the Council of Representatives in the country of 40.2 million people are allocated to minorities. Five seats go to Christians.

In the Iraqi Council of Representatives, quota seats for Christian minorities are allotted in the provinces of Baghdad, Nineveh, Erbil and Duhok. In the Kurdistan Region, five seats are designated for Christians in the region’s parliament.

When the Islamic State took over Mosul in mid-2014, the group offered Christians three choices: convert to Islam, pay Jizyah (Islamic tax) or leave the country. Most of them opted for the third option and fled the conflict-stricken nation.

In the 1990s, the Christian population in Iraq exceeded 1.5 million, accounting for 3 percent of the Iraqi population. The number dwindled during the US-led invasion and the occupation by the IS.

The Christian minority has been reduced to less than 500,000, according to data from the patriarchate.

There are 14 Christian sects in Iraq and most live in Baghdad, the plains of northern Nineveh province and the self-run Kurdistan region.

Chaldeans are the most prominent, up to 80 percent, and are in communion with the Roman Catholic Church. The Chaldean Church traces its root to the Church of the East in Mesopotamia, which emerged in the early centuries after Jesus Christ.

The Syriacs make up about 10 percent of Iraqi Christians. The Assyrians, following the Assyrian Church of the East, are 5 percent.

Although sectarian violence in the country has ebbed significantly, the muhasasa has caused lasting damage and obliterated national unity among Iraqis. Shias and Sunnis and other minorities take part in elections because they fear one another.

Iraq’s independent election commission announced the final results of the October polls on Nov. 30 following weeks of recounting and allegations by the losing parties.

The polls, originally scheduled to be held in May 2022, are the fifth since the toppling of the Saddam Hussein government by a US-led war in 2003

The political bloc led by Shia leader Muqtada al-Sadr emerged as the winner.  Five seats changed as a result of recounting and the political bloc, the Sadrist Movement, led by al-Sadr, a prominent Shia cleric, won a total of 73 out of the 329 seats.

Al-Fatah Alliance, affiliated with the Popular Mobilisation Forces, got 17 seats. The number for the Taqadum, or Progress Party, headed by current speaker of parliament Mohammed al-Halbousi, a Sunni, remained the same, 37 seats.

Iraq held a snap election on Oct. 10 as demanded by anti-government protesters. The results were delayed due to a lengthy manual recount over voter fraud allegations made by a few political parties.

The polls, originally scheduled to be held in May 2022, are the fifth since the toppling of the Saddam Hussein government by a US-led war in 2003.

Government formation is a lengthy process in Iraq involving complex negotiations with multi-ethnic groups. It is expected to take months until a new government is established in the war-torn country, which Pope Francis visited in March at the peak of the pandemic.