Pope's challenge to Korean youth holds true for all, including Filipinos 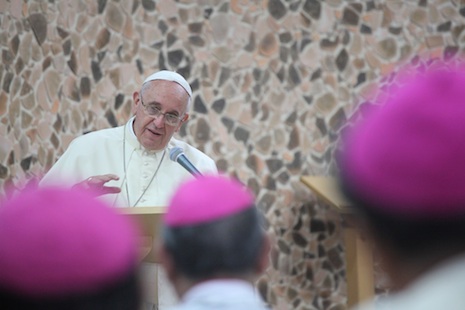 Pope Francis speaks to bishops in Haemi during his visit to Korea last week. (Photo by Steve Finch/ucanews.com)

It was a challenging question that Pope Francis presented to the thousands of young people gathered for the beatification of 124 martyrs in Korea last week. It is also challenging for all of us who claim to be Catholics and Christians.

The pope's message was clear. He was calling on the youth, and all of us, to reject a life of self-gratification, gross materialism and living for wealth alone instead of striving for equality and protection of the poor.

The pope visited a Catholic home for the elderly and embraced some of them, showing compassion and love. In Korea, as in many prosperous nations, there are serious pockets of neglect of the elderly.

Although Korea is one of the wealthiest countries in the world, half of the elderly there live in poverty. Instead of cherishing and respecting them by providing a life of dignity and sufficiency, many of these senior citizens are marginalized and rejected as people of little value.

Many are locked away in retirement homes, and some are even tied to beds and chairs, and given tranquilizer drugs that leave them in a state of semi-conscious stupor that accelerates dementia.

New legislation in Belgium, Switzerland and the Netherlands allows older people to be helped to kill themselves through assisted suicide.

Where will this trend end? Soon the practice could be for nasty relatives and government caregivers to bully and persuade people to kill themselves instead of becoming financial and medical burdens. This is an attitude arising from loveless selfish materialism.

The pope reminded us that the early Catholics of Korea sacrificed themselves for their needy bothers and sisters. "They knew the price of discipleship… and were willing to make the great sacrifices," the pope said.

The pope pointed out these Catholics' love and courage, and rejection of the strict unbending and unequal social structure of their day as an inspiration for people today.

Pope Francis showed compassion for the bereaved families of the hundreds of schoolchildren who drowned when a ferry sank off South Korea. The pope met them in private and embraced them in public. Bishop Kang said that "to forcibly move people crying for justice in order to celebrate Mass simply could not happen. If it did, the Mass would have no meaning".

When Pope Francis comes to visit the Philippines in January, he will find many martyrs, including priests and pastors, human rights workers who gave their lives for the poor and exploited and who were executed.

Like the Korean martyrs, we should be ready to give up some comforts of our easy life and defend the abused children and those poor people exploited by the rich one percent who run the Philippines. We need the spiritual commitment and belief in what is right and good, and be ready to put aside selfish desires and greed to help others in need.

This is the heart of the pope's message.

When Pope Francis comes to the Philippines, I hope he will not be feted and manipulated by glory-seeking elites and publicity-seeking politicos. He will, we hope, visit the poor and the victims of abuse and typhoon survivors, and he will see how little the government did for the reconstruction of homes, schools and public services.

Political corruption is still rife and raging wherever there is money to be stolen. The pope's message in January will be equally challenging for sure, and we will do well to heed it and act in solidarity with those in great need wherever they may be.