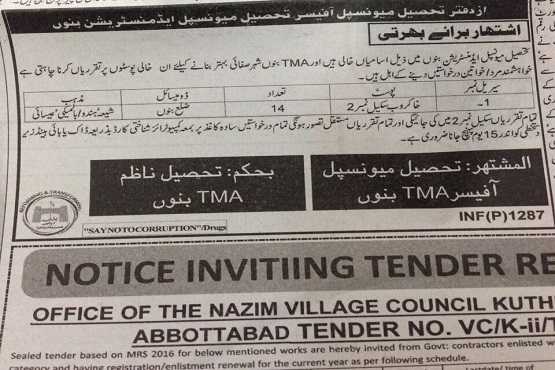 An advertisement for new sweepers placed by local government officials in Bannu district in northwestern Pakistan in a local Urdu daily on March 17. The advert specifies only minorities to apply drawing accusations of discrimination. (ucanews.com photo)

A government advertisement singling out Christians, Hindus and Shia Muslims in Pakistan for sweeper jobs have drawn the ire of church and human rights activists.

The advertisement for new sweepers was placed by local government officials in Bannu district in northwestern Pakistan in a local Urdu daily on March 17. Critics said that this was another example of religious minorities being forced into degrading jobs.

The advertisement said that male and female applicants must be Hindu, Christian or Shia — the minority Muslim sect.

Although officials now claim the word "Shia" was added by mistake, they maintain that only religious minorities are preferred.

The Justice and Peace Commission of Multan Diocese has condemned "repeated discriminatory" advertisements by the government.

"Faisalabad Waste Management Company issued a similar notice earlier this year asking for healthy non-Muslims for waste workers. We sent a legal notice to the administration of the Nishtar Hospital in Multan last year for specifying the same post," Hyacinth Peter executive secretary of the commission told ucanews.com.

"We condemn the latest advertisement and urge the government of Bannu to republish the notice without specifying specific religious communities," he said.

"Non-Muslim sweepers are preferred because they are easily exploited. It is a wrong mindset; people should be sensitized," he added.

Historically, Christians in Pakistan have been assigned jobs described as "degrading and defiling." Road sweepers are mostly Christian and are called "untouchable" or "low-born."

Although Asia Bibi, a Catholic mother of five, was sentenced to death on charges of blasphemy, she maintains her only crime was to drink water meant for Muslims only as she was considered untouchable by her fellow farm workers.

A news report quoting World Watch Monitor said that minority representation in sanitation work in Pakistan is above 80 percent. According to the report, 824 out of 935 sanitation workers in the Peshawar Municipal Corporation are Christian.

More than 95 percent of Pakistan's 180 million people are Muslims, majority of them belonging to the Sunni branch of Islam. Less than 2 percent are Christians, Hindus and other religious minorities.