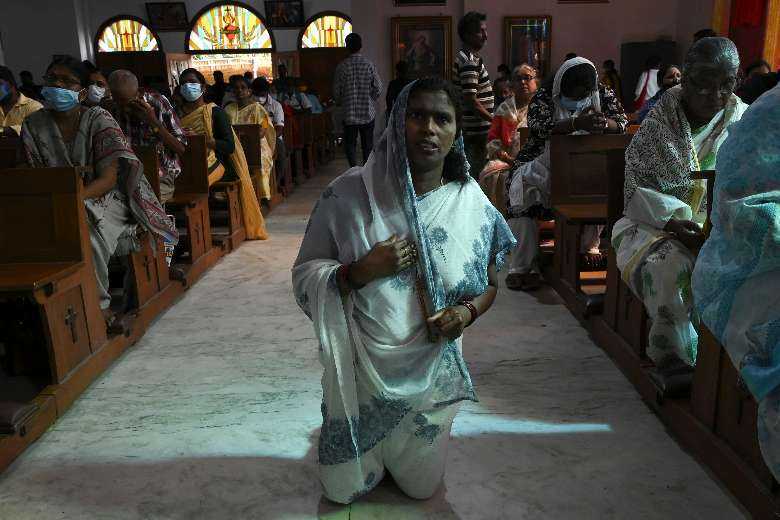 Christians offer prayers during a Good Friday service at a church in Chennai on April 15. (Photo: AFP)

The six were booked for hurting religious sentiments under the Indian Penal Code and released the same day.

School director Manis Mathew told UCA News on May 17 that a Sunday prayer service in the school hall "was wrongly portrayed as a religious conversion activity to target our institution.”

Church leaders across denominations view the police action and the decision to monitor all Christian schools as a deliberate attempt to target and defame Christians through a false narrative.

“We don’t convert anyone as is being made out,” said Father Maria Stephan, public relations officer of the Archdiocese of Bhopal. “The bogey of conversion is being deliberately raised to create distrust and misunderstanding against us.”

The Catholic priest said the government had every right to monitor any illegal activity but it shouldn’t become a cause for harassment of a particular community.

Father Stephan questioned how “a prayer service in a private institution’s space can be portrayed as conversion activity.”

He also appealed to the provincial government to set up a coordination body of its officials and Church representatives to dispel prevailing doubts and confusion over so-called conversion activities.

“The Church believes in mutual respect and a harmonious environment among communities for the welfare of the nation,” he added.

Madhya Pradesh ruled by the pro-Hindu Bharatiya Janata Party has in place an anti-conversion law that forbids change of religion through force, allurement or coercion.

Many believe the issue of religious conversion is kept on the boil by the ruling party and its Hindu nationalist allies with an eye on the state assembly election due next year.

“The new trend is to communalize everything, and Christian-run institutions and prayer services are specially targeted to divert the attention of common people from real issues like inflation and price rise,” said a Church official who did not want to be named.