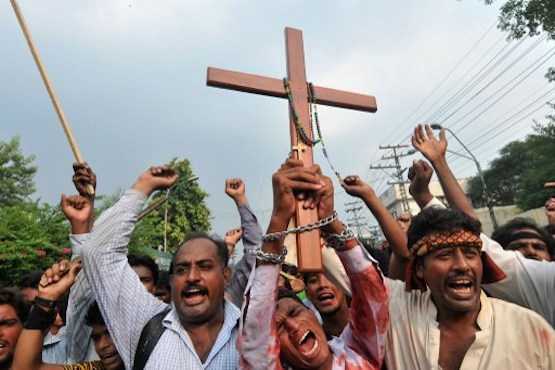 Pakistani Christian's protest in Lahore on Sept. 24, 2013, against the suicide bombing of a church in Peshawar. (Photo by AFP)

Joined by church leaders, parishioners from All Saints Church, in the Pakistani city of Peshawar, gathered to remember the victims of a 2013 suicide bomb attack.

At least 85 people were killed and more than 140 wounded when two suicide bombers blew themselves up at the historic church immediately after Sunday service, in what has been described as one of the most deadly attacks on the beleaguered religious minority in Pakistan.

Jundallah, a group linked to the Pakistani Taliban, claimed responsibility for the attack saying it was in response to U.S. drone strikes.

Those killed in the church bombing included a policeman who tried to grab one of the bombers, and seven children.

Suleman Sabir said his 4-year-old son was among the injured.

"Despite being treated for six months in different hospitals, he gets tired very soon and often complains of pain," said Sabir who lost his 21-year-old sister and 15-year-old cousin in the atrocity.

"His name was not on the list of those injured and his medical expenses were supported by an NGO. The government hospitals do not provide much care in small cities," he said.

His family was waiting for the pastor in the church compound when the Taliban attacked. "I was facing the gate when two explosions occurred," he told ucanews.com.

"I turned back and it was dark. I could smell things burning. The hair on my son was burnt and his legs were bleeding. I found my daughter in the hospital."

Sabir was speaking at a church service to mark the third anniversary of the attack Sept. 22. Anglican Bishop Humphrey S. Peters of Peshawar conducted a three-hour thanksgiving prayer service with 10 pastors on Sept. 22. Worshipers later placed garlands and candles in front of photos of the victims.

"While the whole country is in grip of terrorism, Christians are especially facing difficulties for their faith. We have to be strong and fight back with prayers," he said addressing the crowd of some 550 people.

"We remember those who were martyred in the house of God and pray for the prosperity of their families. We also pray for recovery and rehabilitation of the injured."

"We requested Chief Minister Pervez Khattak for an endowment fund for the disabled, orphans and the widows," he said. "Despite his promise, there was no headway. In fact we were told to set up closed-circuit TV cameras, barbed wire and security guards at our churches and schools. We are ready to do all that if the government clearly confesses that they can no longer protect us."

"We are very disheartened. Four bomb survivors are still being treated in hospitals. It is hard to keep the morale of our church workers and pastors high," he said.

Peshawar, the capital of Khyber Pakhtunkhwa province, has been frequently targeted by Taliban militants.

Earlier this month four suicide bombers attacked a Christian colony 18 kilometers from Peshawar and shot down a Catholic sanitation worker. Four houses were damaged in the attack.

Pakistani Christians have been the target of several terrorist attacks since the United States attacked Afghanistan in October 2001.

The deposed fundamentalist Islamic regime of Afghanistan has many supporters across the border in Pakistan. Most Pakistanis view the United States and Western European countries as Christian, and Muslim militants consider Pakistani Christians to be associated with those "Christian nations."