The bogey of religious conversion is being raised to falsely target believers in Odisha state, it is claimed 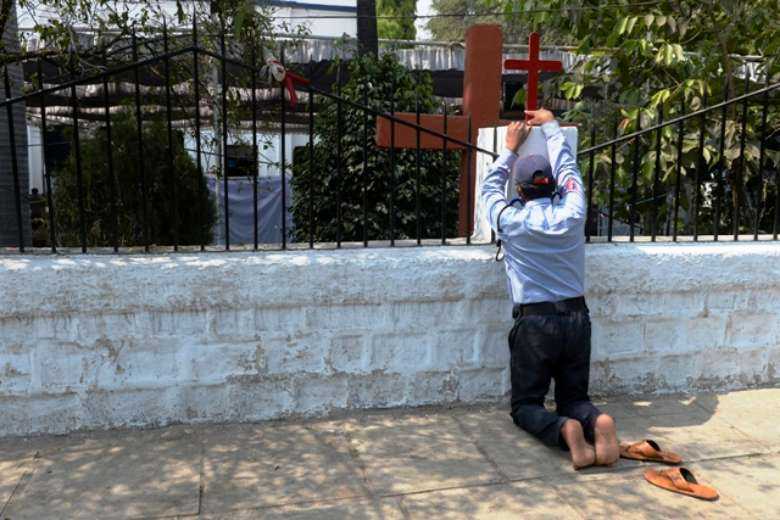 A Christian devotee prays during a Palm Sunday service outside the Wesley Church in Secunderabad in Andhra Pradesh, India, on March 28, 2021. (Photo: AFP)

Christians in Odisha state in eastern India have questioned the sealing of their church and imposition of orders restraining them from gathering for worship after an allegation of religious conversion.

“Our people have been restrained from worshipping since May 17 after the administration sealed the only church in Geltua village under Bhadrak rural police station in Odisha,” said advocate Pratap Chhinchani.

Chhinchani, a practicing lawyer in Orissa High Court, told UCA News on May 27 that the decision to seal the Believers Church was arbitrary with no notice citing any reason served by the administration.

The prohibitory orders imposed by district authorities meant no Sunday worship could be held inside the church where around 100 faithful gather every week.

District officials, however, justified the action by citing a complaint that the church served as a center for religious conversion of tribal people, causing a law and order problem in the locality.

A preliminary probe was carried out after which the church was sealed and orders were put in place to ensure that no untoward incident took place, officials said.

“Our people lodged complaints at the local police station and even informed the district collector and superintendent of police while seeking protection, but to no avail”

Advocate Chhinchani denied the allegation, saying “worship was held in the church for many years but nobody was converted as is being alleged.”

“Our people lodged complaints at the local police station and even informed the district collector and superintendent of police while seeking protection, but to no avail,” he said.

The district administration did not act against the troublemakers and instead a notice was served to the pastor through a subdivisional magistrate.

Chhinchani said the arbitrary and illegal actions will be challenged in a higher court.

Odisha was the first Indian state where an anti-conversion law was enacted way back in 1967.

Christian leaders claim that the eastern state has been a hotbed of prosecution against them for several decades now.

Memories of targeted violence against Christians in Kandhamal in August 2008 after the murder of Vishwa Hindu Parishad (World Hindu Council) leader Lakshmanananda Saraswati are still fresh in the minds of the minority community.

The saffron-clad Saraswati, who was known for his inflammatory speeches, was involved in reconverting Christian Dalits and Adivasis to Hinduism and was murdered with four of his associates in what was widely reported as an attack by Maoist rebels.

Pro-Hindu organizations, however, blamed Christian missionaries and retaliated by attacking them, with priests and nuns, symbols of Christianity, becoming the prime targets.