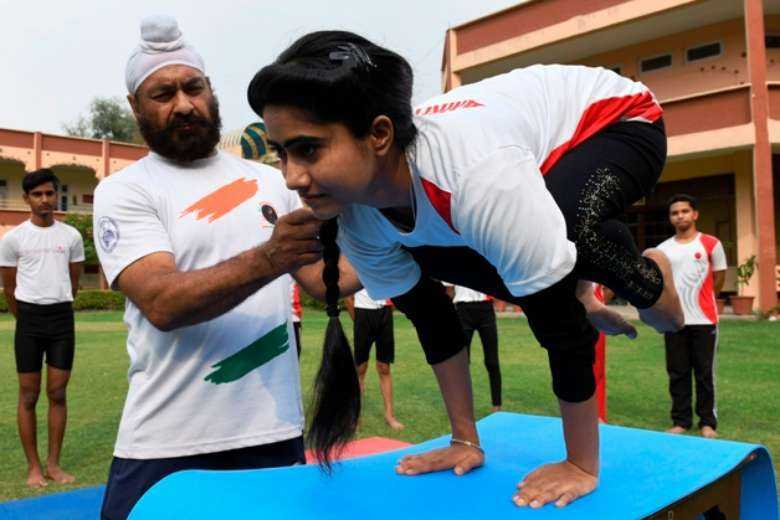 A young yoga enthusiast rehearses for an event ahead of International Yoga Day on the outskirts of Amritsar in Punjab, India, on June 19, 2021. (Photo: AFP)

A circular issued by the University Grants Commission (UGC) on Dec. 29 requires the Hindu yoga ritual involving a specific sequence of movements traditionally performed as worship to the Sun deity to be held in front of the Indian national flag.

The circular issued by UGC secretary Rajnish Jain says “the federation has decided to run a project of 750 million Surya Namaskar in 30 states, involving 30,000 institutes and 300,000 students from January 1 to February 7.”

“The direction from the central government does not appear compulsory and minority institutes may feel free to follow the circular,” Father Maria Charles, secretary of the Indian Catholic bishops’ Commission for Education and Culture, told UCA News.

However, he wondered if the UGC circular was a deliberate move with a hidden agenda. “Ordering the practice of rites from one particular religion on others in schools is not acceptable in a country that upholds secularism,” the priest opined.

The All India Muslim Personal Law Board (AIMPLB) has opposed the directive, saying Muslim students cannot participate in such a program as sun worship is not allowed in Islam.

Maulana Khaled Rahmani, general secretary of the AIMPLB, called the UGC circular “unconstitutional” and said the federal government was “trying to impose the traditions and culture of the majority on others.”

He demanded that the circular should be withdrawn. “The government needs to focus on real issues such as rising inflation and unemployment rather than issuing such a direction.”

Muhammad Arif, chairman of the Centre for Harmony and Peace, told UCA News that compelling everybody to practice Surya Namaskar was unfair as India is a secular country that respects all religions, castes and creeds.

“We are not against practicing any form of yoga but compelling others to follow it could be a motivated move. Minority institutions cannot be dictated to follow so-called practices of the majority,” he said.

Swatantra Dev Singh, a leader of the pro-Hindu Bharatiya Janata Party (BJP) in the northern state of Uttar Pradesh, accused the AIMPLB of unnecessarily politicizing the issue.

Singh, a general secretary of BJP in the state, said Surya Namaskar is partly yoga, an ancient Indian discipline that has grown in popularity across the globe including in Islamic countries of the Middle East.

The International Day of Yoga is an annual event celebrated all over the world on June 21 ever since its inception by the United Nations General Assembly in 2015.