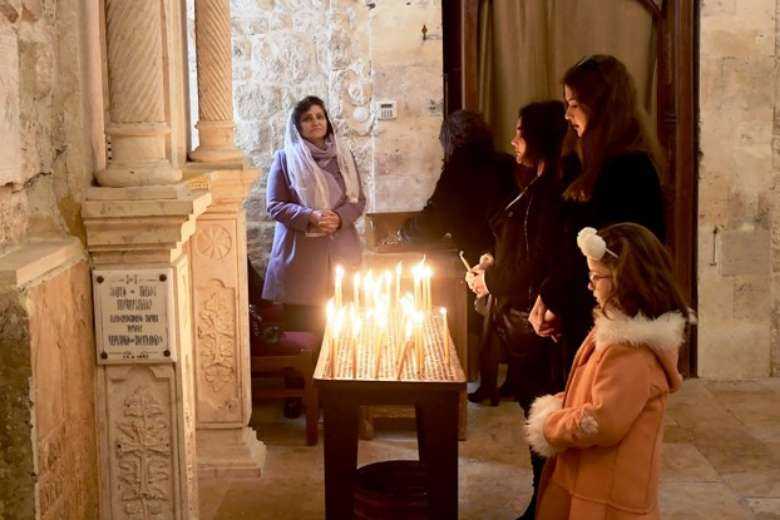 Worshippers light candles at the Armenian Orthodox Church in the Old City of Aleppo in northern Syria as Orthodox Christians celebrate Christmas on Jan. 6. (Photo: AFP)

Christians in Syria have been enduring an 11-year war compounded by migration, misery, sanctions, blockades, death and indifference. Their churches have been damaged, looted or even bombed, but they are picking up the pieces to restart religious life in the war-torn Middle Eastern nation.

Maronite Archbishop Samir Nassar of Damascus in his Christmas message hailed Syrian Christians for standing together as “a heroic family.”

The Christian minority in Syria has been facing what the Maronite archbishop termed as an “endless exodus of peoples, violence and death.”

Despite the hardships, the Syrian Church “remains steadfast in the faith,” according to the prelate of the Maronite Church, which is in communion with the Catholic Church.

He showered praise on those Christians who “pursue the effort to live with dignity in this struggle that seems to have no end.”

The Catholic Greek Melkite Archdiocese of Homs also suffered heavily during the war. The third most populous city in Syria has been completely destroyed and there are hardly any Christians left.

With the economic crisis and the Covid-19 pandemic, Christians are facing difficulties due to the closure of the border with neighboring Lebanon

According to Archbishop Jean Abdo Arbach, the reconstruction process starting with residences aims to bring back Christian families of different denominations to the city.

Aid to the Church in Need, a pontifical charity, has allotted funds to rebuild the Greek Melkite Catholic Archdiocese and the cathedral in Homs among other reconstruction projects it is funding in Syria.

Before the war began in 2011, the Greek Orthodox Christians were the most important Christian community in Homs.

With the economic crisis and the Covid-19 pandemic, Christians are facing difficulties due to the closure of the border with neighboring Lebanon.

According to Archbishop Arbach, before the war began a surgical operation would cost 200,000 Syrian lira (US$80); now it costs 2 million. Medicines are inaccessible to the overwhelming majority of families as their prices have gone through the roof.

Because fuel has become more expensive, heating has become a luxury of the few. Even milk has turned into luxury at 12,000 Syrian lira per kilo while the average salary is around 70,000 lira.

But the archbishop hopes more Christians will return as the reconstruction program gathers steam.

In many parishes in Aleppo, another war-torn city in Syria, Christians of different denominations are coming together to help each other, as are Muslims.

The Armenian Apostolic Church community distribute hot meals to the elderly in front of their cathedral almost every day. Not far from it, the Greek Orthodox Church has set up a relief center.

Aleppo was the most populous Syrian city before the war, followed by the capital Damascus. In its Old Town, recognized as a UNESCO World Heritage Site, there is hardly anything left worth its name because of the war.

Hungarian and Russian Christians have come forward to launch joint projects to support the education of Christians in Syria.

According to Archbishop Arbach, the biggest challenge is education. “What will become of these children later if they don’t have access to education? This is very dangerous,” he remarked in an interview with Vatican News on Jan. 3.

Children in war-torn Syria face impossible choices when it comes to the future. Some 2.5 million of them are out of school across the country. Over 6.1 million children require assistance and 3.1 million children are internally displaced, according to UNICEF.

Two children have been killed and another five injured in the northwest of Syria since the new year began, UNICEF said while urging the warring factions to desist from attacking children.

Without exception, every Syrian child has fallen victim to violence, displacement, severed family ties and lack of access to vital services like health and education.

They have grown up knowing nothing but the crisis. Historic landmarks and once-busy marketplaces where they used to roam have been reduced to rubble.

In the midst of severe poverty, parents are forced to skip meals to feed their children. Instead of sending them to school, they head to work. Girls and boys face the risk of early or forced marriage and sexual exploitation.

In fact, the Syrian crisis was triggered when the government launched a crackdown on public demonstrations in support of teenagers who were rounded up for anti-government graffiti in the southern town of Daraa in March 2011.

Soon, the country descended into a bloody civil war that uprooted millions of families from their homes.

Syrian refugee children are living in more than 130 countries. Turkey, Lebanon, Jordan, Iraq and Egypt host many of them. Turkey is the home to the largest number of refugee Syrian children and their prospects of returning home are dim.

At the overcrowded refugee camps, it is difficult for children to observe public health measures like hand washing and physical distancing.

Nearly 45 percent of Syrian refugees in the region are teenagers and more than a third of them do not have access to education. They are facing dire conditions during one of the coldest winters in the region.

Those children inside Syria seem to be worse off than their counterparts in the other countries. Not only do they feel "least connected to their communities" but they’re also "significantly more likely" to experience discrimination.

It has become hard for the displaced Syrian children to imagine a future in their homeland.