Christians must offer real hope to the most vulnerable, pope says

In his World Day of the Poor message, Pope Francis said that followers of Christ must sow tangible seeds of hope 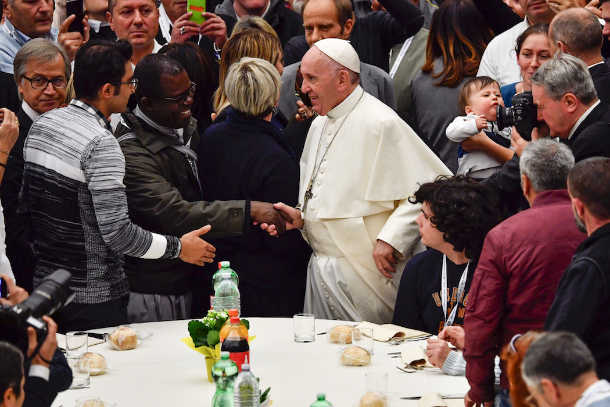 Pope Francis shakes hands as he arrives to have a lunch with destitute people, on Nov. 18, 2018, at the Paul VI audience hall in Vatican, to mark the second World Day of the Poor. (Photo by Vincenzo Pinto/AFP)

The option for those who are least, those whom society discards, is a priority that Christ's followers are called to pursue, Pope Francis has said.

"We can never elude the urgent appeal that Scripture makes on behalf of the poor," the pope said in a message for the Third World Day of the Poor.

"The situation of the poor obliges us not to keep our distance from the body of the Lord, who suffers in them," Pope Francis said in the message dated June 13, the feast of St. Anthony of Padua, patron saint of the poor.

"We are called to touch his flesh and to be personally committed in offering a service that is an authentic form of evangelization. "Commitment to the promotion of the poor, including their social promotion, is not foreign to the proclamation of the Gospel. On the contrary, it manifests the realism of Christian faith and its historical validity," the pope said.

The World Day of the Poor — to be marked each year on the 33rd Sunday in Ordinary Time — will be celebrated this year on Nov. 17 and will focus on a verse from Psalm 9: "The hope of the poor shall not perish forever.”

These words "express a profound truth that faith impresses above all on the hearts of the poor, restoring lost hope in the face of injustice, sufferings and the uncertainties of life," the pope said.

Down through the centuries there have always been rich and poor but today "we must acknowledge many new forms of bondage that enslave millions of men, women, young people and children," he said.

"The option for those who are least, those whom society discards, is a priority that Christ's followers are called to pursue, so as not to impugn the Church's credibility but to give real hope to many of our vulnerable brothers and sisters," he said.

In his message the pope highlighted families forced to leave their homeland to seek a living elsewhere; orphans who have lost their parents; young people prevented from employment by shortsighted economic policies; victims of different kinds of violence; millions of immigrants who become victims of exploitation.

He also remembered the "homeless and ostracized persons who roam the streets of our cities."

"How many times do we see poor people rummaging through garbage bins to retrieve what others have discarded as superfluous, in the hope of finding something to live on or to wear," he said.

"They themselves become part of a human garbage bin; they are treated as refuse, without the slightest sense of guilt on the part of those who are complicit in this scandal."

In this World Day of the Poor message, the pope mentioned two people, who in their lives worked for the disadvantaged.

Quoting Italian Father Primo Mazzolari, he said, "the poor are a constant protest against our injustices; the poor are a powder keg. If it is set on fire, the world will explode."

Pope Francis also recalled Jean Vanier, saying that, "thanks to his enthusiasm, he gathered around himself great numbers of young people, men and women, who worked daily to give love and restore a smile to many vulnerable persons, offering them a true ‘ark’ of salvation from marginalization and solitude."

As his finished his message, the pope said: “If the disciples of the Lord Jesus wish to be genuine evangelizers, they must sow tangible seeds of hope.

“I ask all Christian communities, and all those who feel impelled to offer hope and consolation to the poor, to help ensure that this World Day of the Poor will encourage more and more people to cooperate effectively so that no one will feel deprived of closeness and solidarity.”

For the full text of the pope's message click here.