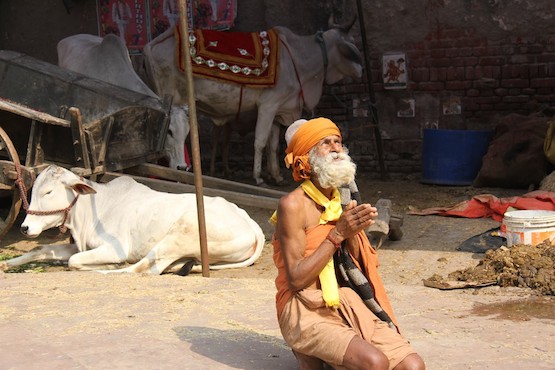 A Hindu holy man prays in New Delhi at a stable where cows are kept and venerated, in this file photo. (ucanews.com photo)

Christian and Muslim leaders in India have demanded government action to combat increasing cow vigilantism, which they say is a threat to the country's secularism and democracy.

"These incidents indicate a particular ideology being imposed on others. A great civilization does not target people for what they eat," Father Savarimuthu Sankar, spokesperson of Delhi Archdiocese, told ucanews.com.

"On one hand India talks of protecting cows, yet on the other hand expensive designer goods made of cow leather are being sold in the country," he said.

Hundreds of Christians, Muslims and Dalit people demonstrated in New Delhi Sept. 23 demanding action from the government against violent vigilantism. The issue has become political, with top politicians joining the chorus of those calling for cow protection.

Orthodox Hindus worship cows, considering them a sacred animal. Most states of India have banned cow slaughter. Since the Hindu nationalist Bharatiya Janata Party (BJP) came to power two years ago, vigilantism has spread across India.

In separate incidents in Gujarat, Haryana, Jharkhand, Madhya Pradesh and Rajasthan, cow vigilantes have attacked or lynched people for skinning dead cows, or for possessing or transporting meat that attackers in some cases claimed was beef.

Last month, Raghubar Das, the BJP Chief Minister of the eastern Indian state of Jharkhand, said that those who treat India as their country should consider the cow their mother.

Cow vigilantism has also started to impact festivals. In Haryana state, ahead of the Muslim festival of Eid al-Adha, the "Cow Service Commission" asked police to collect samples of popular Indian food Biryani from restaurants to check for the presence of beef.

"A particular community's religious sentiments should not be imposed on others. This creates a fear factor among other communities and they feel threatened," said Mary John, President of the Dalit Christian Liberation Movement.

Despite Prime Minister Narendra Modi's statement last month that cow vigilantes are "anti-social elements in the garb of cow protectors", the government has not acted to stop such incidents. According to John, "the vigilantes, though a very small group of people, take advantage of the government's inaction."

Navaid Hamid, Secretary of the South Asian Council of Minorities, told ucanews.com that cow vigilantes have become a law unto themselves, unleashing terror on people.

Hamid took part in a protest in New Delhi that demanded a ban on cow vigilantism in India. The protesters, including Muslim and Dalit organizations, also sought passage of the pending communal violence bill to safeguard the rights of the minorities in the country.

"Minorities are being subjected to systematic, psychological and low-intensity attacks which are not in the limelight, but have an impact," Hamid said.