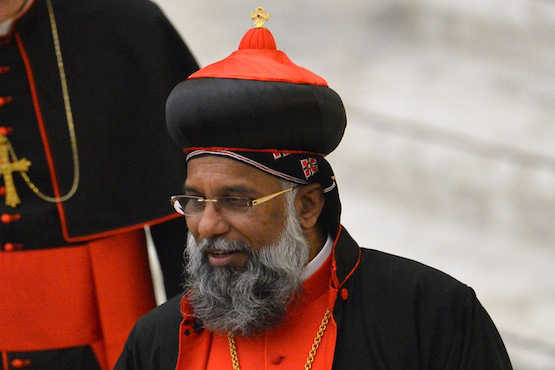 Cardinal Baselios Cleemis seen in this Nov, 26, 2012 photo at the Vatican, says the anxiety of Christian minorities in India is growing. (Photo Vincenzo Pinto/AFP)

Indian Christians' trust in the government has become shaky in the wake of increased attacks on Christians and members of the clergy, says Cardinal Baselios Cleemis, president of the Catholic Bishops’ Conference of India.

The cardinal was addressing the media in New Delhi Dec. 20 after visiting a central Indian city where Hindu activists attacked two Catholic priests and 30 seminarians accusing them of attempting religious conversion.

The Christians, who were in a village singing Christmas carols, were attacked and their car torched just outside a police station.

Police in Madhya Pradesh state kept them in custody for for a night. The administration acted under pressure from Hindu groups, Cardinal Cleemis claimed.

Modi’s pro-Hindu Bharatiya Janata Party (BJP) runs the government in 18 of 29 Indian states, including Madhya Pradesh, where Christians leaders say the administration is unwilling to act against Hindu fanatic groups.

Frequently, Christians are attacked on allegation that they violate laws that regulate religious conversion. These laws also make it a criminal offence to attempt to convert anyone using fraud, inducement or allurement.

Often Christian work in the fields of education and health care of villagers can be interpreted as inducement or allurement.

Cardinal Cleemis also met federal Home Minister Rajnath Singh Dec. 19 "to tell him about the pain and shock" of the Christian community at the latest incident in Madhya Pradesh.

Christians leaders say attacks have increased since BJP came to power in New Delhi in 2014. In 2017 alone, there were some 600 cases, according to their records.